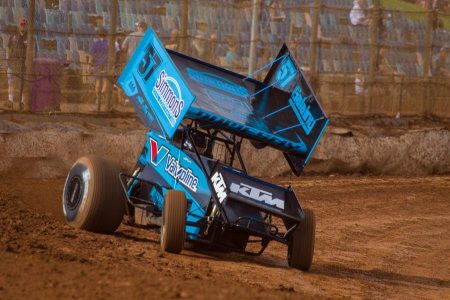 It was yet another strong night for the Simmons Civil Contracting/Matt Dumesny Racing team at Valvoline Raceway tonight for the annual New South Wales Sprintcar Titles.

Entering the event as the defending champions, local talent Dumesny kicked off the night with a fifth place qualifying drive in the searing Australian summer heat.

“We went out last for qualifying and ended up in fifth, which wasn’t too bad,” said Dumesny. “We started out of three in the heat and ended up finishing second, which qualified us for the shootout.”

After picking off a selection of talented drivers including American import and Knoxville Nationals champion, Brad Sweet, Dumesny would miss the critical feature race pole position due to a disqualification.

“In the shootout I won against [Daniel] Sayre, Max Johnston and then I had to race Brad Sweet and I won that one, which is pretty cool,” he commented. “I raced Jordyn Brazier and we actually won that as well and I believe I should have been on pole.

“Although Jordyn himself thought the start was even, I was disqualified due to jumping the start. It was an unfortunate situation, but that’s how these things go in racing.”

Starting out of third position in the feature race, the local driver would eventually cross the finish line in fifth spot after an eventful 35 laps around Valvoline Raceway.

“We actually made our way into the lead in the first few laps and Sweet came up underneath and got by me,” he explained. “We were right with him for around 20 laps and then we we had a stoppage.

“There were a lot of stoppages following that first one, and I kept getting stuck in the outside row on the slick and just couldn’t get going on the start, which was definitely frustrating for me.

“I just gave it everything I had though and I tried to run the top where nobody else was. I ended up going off the track and just made a few stupid mistakes, but it was still another solid night for us.

“We were up there racing for the lead once again and we felt good out there, so I’m going to head home and come back even stronger on 1 January. A huge thanks goes out to my team and supporters, things are going very well for us this season.”