Top 5 ahead of ASBK Round 5

Top 5 ahead of ASBK Round 5 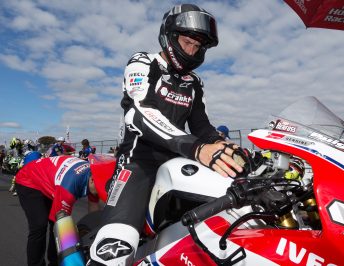 The front runners in the YMI Superbike class of the Yamaha Motor Finance Australian Superbike Championship presented by Motul Pirelli (ASBK) are locked in a tight battle for the championship ahead of the fast approaching Round 5 at Morgan Park Raceway (August 25-27).

“It’s going really well for me in the championship so far in 2017. In no way have we really been dominating but consistent results now see us leading the standings.

“At the last round at Darwin we really surprised ourselves with how well we performed with the new Honda CBR1000SP2 debut and to get two podiums was incredible.

“It was a really important two days at the Official ASBK Test at Morgan Park Raceway. It also helps that we’re going to one of my stronger tracks where I feel very comfortable and can get the most out of the machine. We knew pretty early on in the test where we stand but the best part was just enjoying the new machine. The big improvement has come from the engine braking, it’s allowed the bike to be a lot more stable in the entry into the corners. It’s opened up all sorts of possibilities with the setup of the bike.

“It does bug me that I’ve only won a single race this season after coming second so many times. However with the class being so even and several different winners, we’ve just missed out on the top step on a few occasions. I’m just wrapped to be leading at this point.

“It was quite a similar situation last year, when I only had one race victory and I ended up taking the championship in the end. We just have to fire on all cylinders and get the most out of the bike in the remaining races.

“We’re definitely in a position where we can get some solid results as our race pace is very strong and our race pace on the Pirelli tyres is even stronger with the new bike. I’m just excited to go to the remaining tracks with more horsepower. There are no excuses not to do well.

“In my opinion, Waters has come out really strong in the final part of the year. He’s not out of the championship by any means but he will need to push hard for wins. I would expect him to be very strong. Obviously you can’t count Wayne (Maxwell) out as he’s always at the front. I think they are the guys to look out for.

“A few things this season have gone our way and a few have not, but the secret to our success is really no secret at all. I’ve just been quite consistent throughout the rounds. I am feeling really good coming into Round 5 championship and the BCperformance Kawasaki is really coming into its own, so it’s a matter of getting out there and getting amongst it!

“Last time I raced in ASBK was 2013 and I was on the podium for every single round, I even set new lap records at Sydney Motorsport Park back then. My results both this year and in the past speak for themselves really, and I’ve always been a championship contender.

“Kyle Buckley (Kawasaki Bcperformance, ZX-10R) and I are in the same team, and it’s great to bounce a few ideas and opinions off him back in the pits. We operate fairly independently and its never a good thing when your teammate suffers an injury like he did at Darwin (broken ankle), but I am focused on the task ahead and it’s business as usual for me. Buckley will bounce back stronger than ever becuase he is a young and keen guy. He’s a great competitor who for a rookie Superbike rider was really moving around the tracks.

“I don’t have a lot of track time at Morgan Park Raceway aside from the Official ASBK Test the other week, so I will still be feeling it out right up until race day. The competition is so tight at the top end, no one can beat Herfoss around that track and Maxwell will be on the attack. Falzon was very fast in testing and his race pace should be up there. I will just get down to business and go for it!

“Confidence is high on the back of the Official ASBK Morgan Park Test this year compared to last because of the recent track resurfacing. The combination of us in 2017 moving to Pirelli tyres, the track resurfacing and my overall ability and skill level improving has really enabled us to achieve what we have set out to and now we have a competitive package.

“I am really looking forward to getting back out there and building a few points for the championship. Im focusing on each round rather than the season as a whole. We did fall to third in the standings after the Darwin Round, but in saying that we are not too far off the lead, but in motorsport anything can happen. I am just trying to get some runs on the board. There is no championship lead to defend at the moment so I’d say the monkey is off my back for now!

“Morgan Park will be difficult over race distance as the tight and twisty track is physically demanding to push a Superbike around a small track. It’s a wild lap around Morgan Park, comparable to no other in Australia. To place well, each lap needs to be laid on the line. Fitness plays the biggest part in Morgan Park success. The guys with the most strength and endurance will do well there.”

“The feeling in the Yamaha camp is rally positive heading into Round 5 after a challenging Round at Hidden Valley Raceway for us. I bounced back at the Official ASBK Test, topping the time sheets ahead of the field, which has given us a real confidence boost.

“The R1 is designed as a MotoGP style bike that is more suited to a fast and flowing circuit and suits tracks like Sydney Motorsport Park and Phillip Island Grand Prix Circuit. Morgan Park is not a favourable track for us, but we have changed a few settings to match the tight nature of it and the team is sure we can make it work over race distance.

“We are always strong over race distance, and I’ve been training flat out to build strength for the Round to help with the G-forces in braking and acceleration. The mistakes made in Darwin have meant that I will need to work harder to stay out in front and stay there!”

“I’m going into Round 5 full of confidence after taking the last two wins at Darwin. The morale within Team Suzuki ECSTAR is extremely high at the moment and we’re looking to carry momentum into this weekend’s racing.

“It was great to ride at Morgan Park Raceway for the first time at the Official ASBK Test. The test was good for me, we had limited staff for the two days but we achieved a lot and I hope we can make further steps during the practice sessions on Friday. Although I was hoping for more, we’re still only three tenths off the leading pace. The track has recently been resurfaced and lap times should be extremely quick.

“The Suzuki was working great on the technical track and I hope we can dial it in even further to fight at the front. The field is extremely competitive at the moment so it will be a challenge for sure.

“I’ve just come off a successful race at the Suzuka 8 Hour with a ninth place finish. Its great to race in massive events like the 8 hour but I’m looking forward to racing in the ASBK once again.”