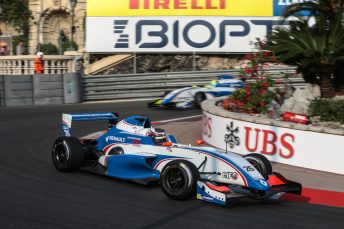 Monte-Carlo’s world famous streets greeted Mark Burdett Motorsport’s Formula Renault Eurocup pairing Presley Martono and Julia Pankiewicz for the first time over the weekend, 27th/28th May, with both of the British squad’s drivers showing strong progression during the fourth event of 2017.

Indonesian 16-year-old Martono bounced back from an unfortunate round seven retirement, after contact with the barriers at Sainte Devote, to record a well-deserved top 15 finish, eighth highest Rookie, in a Safety Car shortened round eight on Monaco Grand Prix raceday.

Pankiewicz, meanwhile, had to forego race one of the weekend after just missing the cut in qualifying – only the fastest 28 drivers being permitted to start a race in Monaco. For the second encounter on Sunday, though, the Polish racer managed to climb through into the top 20, from 27th on the grid, despite being severely delayed at the hairpin on lap one.

“Presley did well in race two, as everyone knows Monaco is all about qualifying but he did a great job at the start and to make up plenty of places to finish in the top 15 was very good”, commented team principal Mark Burdett, “Race one didn’t go to plan, unfortunately, after he picked up damage to the front wing on the first lap and that hindered his race thereafter.

“With Julia only able to take part in Sunday’s race, she obviously had less track time than the other drivers out there but she got more and more competitive throughout and her lap times were very good. It’s a shame she had the delay on the first lap at the hairpin and had to reverse to get back into the race, without that an even stronger finish would have definitely been possible.”

With Pankiewicz having to miss round seven on Saturday, Martono was obviously the sole Mark Burdett Motorsport representative in the opening Monaco encounter which took place under absolutely glorious French Riviera skies.

Starting in 20th place on the grid, the 11th highest Rookie, the Indonesian youngster made a clean getaway and negotiated the first part of the lap without drama. In a tightly packed group heading into the congested Hairpin, Martono looked to try and climb into 18th place but slight contact in the pack resulted in damage to his front wing.

Running in 21st position with quarter of an hour to go, Martono was then able to gain a position into the final 10 minutes at Rascasse when the driver he was pressuring ran into the barriers. Back inside the top 20 and running strongly, Martono then unfortunately made contact with the Armco at Sainte Devote under braking – a legacy of the front wing issue – and ended the race in retirement.

For round eight on Sunday, taking place just prior to the Formula One Grand Prix itself, Martono lined-up in 22nd place overall with Pankiewicz starting in 27th position and both drivers got away from the line well.

Into the notorious hairpin, though, they were each delayed as cars came to a standstill at the apex, Pankiewicz coming off worse having been blocked by a stranded car and needing to select reverse gear in order to continue.

Martono was able to depart the scene without too much in the way of drama and made his way into 16th position overall and eighth highest Rookie. Pankiewicz did manage to get going again, but a long way down on the rest of the pack, but as a result of some retirements she held 23rd spot.

Going on to move into the top 20, while Martono climbed into 15th place, the Safety Car then appeared with less than five minutes left on the clock. In the end, the race concluded under cautionary conditions with strong results for both Mark Burdett drivers.

After three back-to-back weekends of racing action in the UK and mainland Europe, Mark Burdett Motorsport now heads back to its base in Lincolnshire for a deserved rest with the fifth event of the Formula Renault Eurocup season set to take place over the weekend 1st/2nd July at the Hungaroring near Budapest in Hungary.