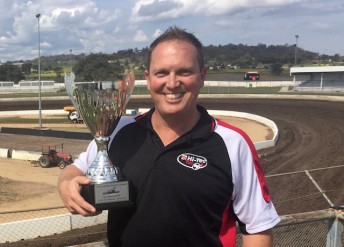 Hi-Tec Oils Speedway Events manager, Bennie Bishop proudly clutches the trophy on behalf of his team for Most Improved Speedway

The nationwide panel of judges deemed the venue to be the most improved in the nation, after a $2m dollar infrastructure and renovation injection in the last twelve months.

Speedway events manager, Ben Bishop labelled the award as a massive feather in the cap of the Charlton venue, that has a sizable place in Australian speedway.

“We are very honoured as this season we celebrate the 40th anniversary of the opening of the track back in 1977, so what a wonderful reward this is for all the current and past volunteers and staff who have made this such a special venue, and I’m sure this trophy will take pride of place in the Downs Speedway Clubrooms.”

“It’s a cliché to say that this was a team effort, but everyone from management through to crash crew have a part in this and every single one has a right to be proud.”

Four-time Australian Modified Sedan Champion and local legend, Peter Lack said it was a fitting reward for the local team after a massive effort in the last twelve months.

“It’s great to see Barry and Felicity and the team get the rewards for all their hard work this season because this is a huge achievement for a local track. The calendar this season is massive and I hope the Toowoomba public get out their at least once this year to see the venue in action, so they can be proud of what’s been achieved here on a national level.

The season kicks of with the “Carnival of Power” on September 24 before the Ultimate Pink Night that attracted 3500 spectators last year returns featuring the Will Power 500 on November 5, while the Charlton venue will welcome the arrival of the famed World Series Sprintcars for the first time since 2010 on both December 3 and January 3.

For more details, check out www.toowoombaspeedway.com or the Hi-Tec Oils Speedway facebook page.