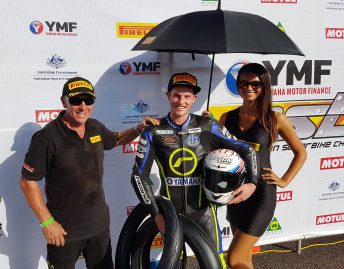 Link International will award a set of brand new Pirelli Tyres to a lucky Hi-Tec Batteries Supersport 300 rider at every remaining round of the Yamaha Motor Finance Australian Superbike Championship presented by Motul Pirelli in an initiative that rewards riders on their attitude and spirit over a race weekend. Tom Bramich (Ron Angel Classic Racing, Yamaha YZF- R3) was selected as the Round 4 Hidden Valley Raceway winner!

Pirelli designed the award want to reward privateer riders who represent the brand well, look after the appearance of their bike and perform at a pace beyond the norm.

In a weekend in which Pirelli dominated all ASBK classes to take a clean sweep within every podium, it’s only fitting that the award took centre stage at Hidden Valley Raceway.

The Hi-Tec Batteries Supersport 300 class was chosen to showcase the award as it is it is made up of predominately privateer family operated teams. It also provides Pirelli a great opportunity to work with riders with all sorts of experience levels. To watch them grow and develop as they learn their craft is what it’s all about. Pirelli enjoys the one on one interaction with the teams and riders.

Bramich had a very impressive weekend scoring ‘overall’ second, third and fourth places during the course of the weekend at Hidden Valley Raceway. The rider from NSW currently leads the ‘Over 300’s champoinship standings. His brother, Ben Bramich also races in the same class.

Bramich shared shared his excitement on the podium as he was handed set of tyres by Pirelli’s Technical Officer David Fuller; “I’m so grateful to Link International and Pirelli for winning the ‘Rider of the Round Award’, any assistance is greatly appreciated and the extra tyre goes a long way.

“The technical advice and expertise that Pirelli provide, in particular through Dave Fuller is excellent,” According to Bramich.

“We didn’t expect to be leading the ‘Over 300s’ class at this point in time but it’s definitely an advantage. However the competition is so close and there’s still plenty of races left in the season,” Bramich concluded.

Fuller described the selection process; “Pirelli has been thinking about an initiative such as the ‘Pirelli Rider of the Round Award’ for a while now as we are all about the future of the sport. We don’t want to just promote riders based on points, but reward them for the manner in which they carry themselves, regardless of their race result. We’re looking for a good role model for other kids coming up the ranks to look up to for support and guidance.

“Over the race weekends, I talk to plenty of families around the paddock,” Fuller stated. “In this particular case Tom and Ben have been fantastic. They’ve both been raised well, they respect all the other riders, don’t say a bad word about anyone and are exceptional at representing their sponsors. That’s the criteria we look at. If they ride well, that’s an added bonus. I know a lot of the racers as they’ve grown up in the paddock and I really appreciate when they act as an ambassador for the sport. Even when things don’t go their way, they always represent their sponsors well and keep their chin up,” Fuller concluded.

Keep an eye out at future rounds to see which riders get selected as the future winners of the Pirelli Rider of the Round Award.

For more information on Link International and its products visit http://www.linkint.com.au/