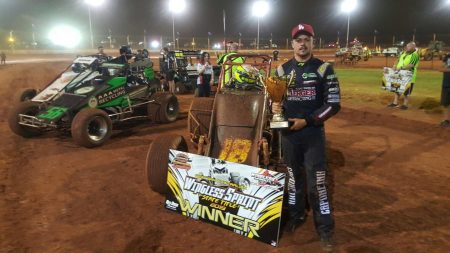 Being unable to compete in the event due to work commitments, Jolly got in touch with Payet earlier this month to offer him an opportunity to guest drive his WA # 18 Jolly Good Auto Electrics / HRP Specialities supported Cool car during the event, having been a sponsor of Payet in a range of classes over the past four years.

Jumping at the opportunity, Payet was eager to participate in the event, transporting the car from its Perth home base at the HRP Specialties workshop almost 600 kilometres east to the Kalgoorlie track in what was a trip that certainly paid off.

“Trevor’s always been a massive supporter of mine as one of my sponsors and it’s great to be able reward him with the best possible result, as he provided me with a very strong car that was good enough to win.”

Not racing with the Wingless Sprints class much since splitting his time between 410 Sprintcars, and Speedcars, Payet’s lack of seat time in a Wingless Sprint class had no adverse effect on him, even though he was piloting a foreign car.

Placing fourth and first in his heat races on the opening night of competition, Payet came home in the runner-up spot during the 20-lap preliminary feature race, before backing up that form on night two with a win and a third-place finish in his remaining heat races to qualify him towards the front of the feature-race field.

Being elevated to second place from third when the race leader retired from the race, Payet continued to lump the pressure on new race leader Brendon Wedge until taking advantage of a late-race restart, where he was able to drive under Wedge to take the lead. From there, Payet couldn’t be stopped, going on to claim an impressive victory.

Jolly is proudly supported in the 2018-19 season by Jolly Good Auto Electrics and HRP Specialties.