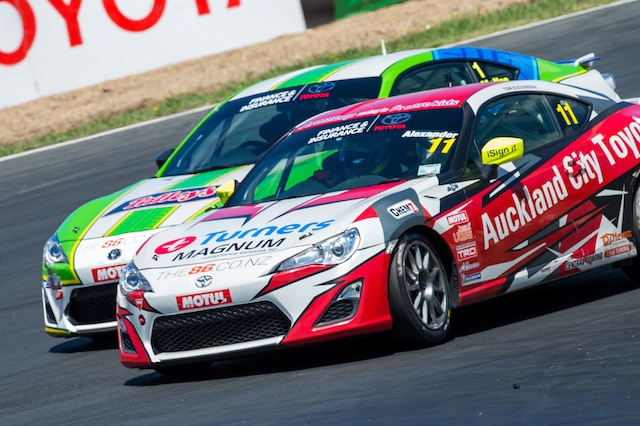 He’s closing in on the title, but Bombay’s Tom Alexander still has plenty to do to win the 2014-2015 Toyota Finance 86 Championship after winning the first race of the final round today at Hampton Downs.

The championship finale is part of the Toyota Festival for the first time.

His major rival Jamie McNee (Wellington) held on to finish second, keeping his championship defence alive in the process, while another key rival, Ash Blewett, was left wondering what he has to do to win a race after puncturing a tyre while leading.

Alexander tucked in behind championship rival Blewett at the race start, allowing him to safely take the lead but making sure defending champion McNee was held in third place into the first corner.

The leading trio were joined by Callum Quin and slowly edged away from the rest of the field, making the most of the slipstream or ‘draft’ created by three cars racing nose to tail.

Then Ashley Blewett ran wide at the long right hand corner that returns the field to the front straight, and Alexander was through to lead, McNee staying close but coming under intense pressure from Callum Quin.

Blewett was out of contention, a flat tyre on the far side of the circuit putting him into the pits. He rejoined after changing the left front wheel but was two laps down.

Meanwhile Alexander was controlling the race, fending off a determined McNee until the latter fell back and Quin slipped through to be second.

On lap seven, as he extended his lead toward and beyond two seconds, Alexander also posted fastest lap of the race, a 1:14.833.

He was the only driver to break through into the 1:14s and took the chequered flag with a margin of 2.92 seconds over McNee.

McNee had salvaged valuable points on the last lap with an aggressive dive past Quin, the two cars going side by side to the flag and McNee taking second by just 0.013 seconds.

The grid for the second race is decided on race one finish positions with the race winner drawing a marble that decides a partial reverse grid.

Alexander drew a six, putting both himself and McNee on the third row of the grid. Bruce Thomlinson takes pole for that race which starts at 10.15 am tomorrow.

Alexander can put the championship beyond McNee’s reach by finishing in front of him in race two. Failing this, the title will be decided in the final race of the weekend – and the championship – tomorrow afternoon at 1.30 pm.