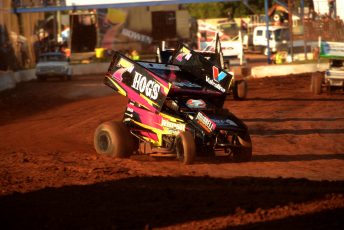 Despite not gaining the results that he himself expects, it was still a great effort in a field of over one hundred cars. On the final night, Toby came home thirteenth in the B-Main.

“I’d love to say I’m happy but I’m not with those kind of results. Some say I put too much pressure on
myself but that’s only because I believe in what I’m capable of doing and I work hard to make sure I
perform,” a reflective Toby said. “If you’re happy with running in the middle and not contending for
wins then you probably will never be a winner.”

This past weekend ends a solid month of racing which has seen the team racing in two states and
countless amount of laps.

“We didn’t really wreck anything, but we also didn’t win anything. For sure it could have been a lot
worse of an international season but I think the best way to sum it up is tough. We had some good
showings and sometimes I felt decent in the car but the competition is so fierce these days that you
can’t be a little bit bad in any race. You have to be hungrier than the others otherwise you’ll get
eaten.”

For now, Toby will take a well-earned break for one week before being back at it on February 11, back at Valvoline Raceway for the next round of the Ultimate Sprintcar Championship.

“We have a few things that we are going to be changing now. I’m not sure when we’ll be implementing them but it’s a work in progress. Other than that my team and I will be pushing on as
normal.”

There are still plenty of opportunities to get your hands on some merchandise as the season begins
to wind down. Also stay up to date via the various social media outlets including Snapchat which is
proving very popular. If you have Snapchat, simply add Toby with the username: tbb70