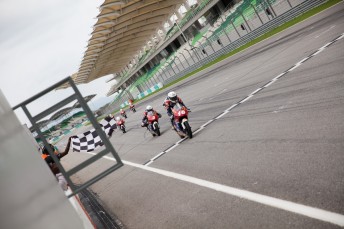 Japanese rider Kaito Toba took victory in the first of the two Shell Advance Asia Talent Cup races this weekend at the Sepang International Circuit in Malaysia at the Malaysian Super Series event.

Following two Free Practice sessions on Friday and a wet Qualifying practice on Saturday morning, the 22 riders Shell Advance Asia Talent Cup lined up to do battle on Saturday afternoon.

Thai rider Nakarin Atiratphuvapat started from his second pole position of the season – his first being at Sentul in Indonesia.
Championship leader Yuta Date, from Japan, lined up second, with compatriot Ayumu Sasaki in third.

The second row was made up of Kaito Toba, local rider Adam Norrodin, as well as the only female rider on the grid – Thailand’s Muklada Sarapuech.

In the baking Malaysian heat the riders got away at 14:45 to contest the 22-lap race. Sasaki took the lead from the start, sitting at the head of an eight-rider strong train.

Date did not fair so well from the off, and was forced to fight up through the field early on. Shafiq Rasol on the other hand was superb off the line and was able to battle in the lead group after starting from 10th.

The first drama occurred on lap seven, as Sasaki and Atiratphuvapat made contact and went to ground.

This left a group of four Japanese and three Malaysian riders fighting it out up front.

Toba was in superb form and managed to hold his nerve until the end and take the win, followed by Rasol, who scored his first podium of the season. Completing the rostrum was championship leader Date.

This was Toba’s third victory of the season, leaving him only 14-points behind Date in the overall classification.

Shell Advance Asia Talent Cup director Alberto Puig commented: “I was expecting the lead group to be smaller, as there were two or three riders that looked a step above the rest in the practices.

“But the race was not very fast, which made for a big group at the front. And when such groups form, there is always more risk of collisions and falls, which is unfortunately what happened. Tomorrow I expect a slightly faster race.”

Race number two will take place tomorrow at 13:20 local time and will be race six of the nine races of the season.