Titman and Gee are chasing three

Titman and Gee are chasing three 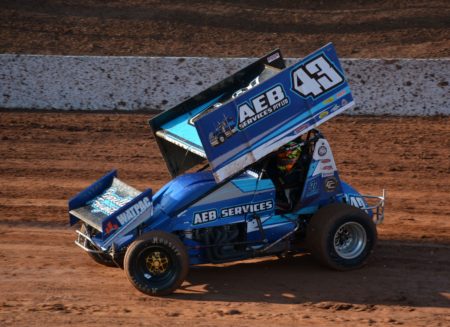 This Saturday (February 29) might be the end of summer, but rest assured the action at Archerfield Speedway will be sizzling when round 12 of the East Coast Logistics Sprintcar Track Championship is decided, bringing together no less than five drivers who have secured feature race victories so far this season. In what has been of the most competitive seasons for some time with regard to the number of different drivers who have visited victory lane, Luke Oldfield, Brent Kratzmann, Mitchell Gee and Kevin Titman are amongst those who have tasted the spoils of victory and all five will be seeking further success when they hit the track this weekend.

The previous round of the East Coast Logistics Sprintcar Track Championship saw Kevin Titman prevail, emerging unscathed from a clash with McHugh to secure his second feature race win for the season. For much of the race, it was McHugh who looked on track to finish atop the podium, only to incur a late-race penalty that cruelled his chances and left him fourth at the flag behind Titman, Gee and series leader Aaron Kelly, who has finished on the podium twice so far in his rookie season and come very close to securing his maiden feature race success (he was leading round 11 before spinning to avoid an errant tailender). Gee and Titman are the only drivers in the field to have won multiple rounds of the ECL Championship this season, with solitary successes falling the way of Kratzmann and Oldfield, the latter proving as spectacular and popular as ever any time he hits the track. McHugh, meanwhile, was superb for so much of the previous round and, having delivered another mighty drive into second spot last weekend in Toowoomba after suffering an early setback, a trouble-free run this weekend might just deliver the feature race win that has been so close, yet proven so elusive.

Kelly will be one of 18 other drivers looking to add their name to the winners list, including Adam Butler and Ryan McNamara, both of whom have scored their first ever podium results this season. Brock Dean is another who has featured on the podium this season, along with former track titleholder and Australian Open champion Bryan Mann who, by his own admission, has been less than his best in recent Archerfield outings and will be desperate to rediscover the type of form that has carried him to numerous feature race wins.

Anybody who dares to suggest that there is a stronger field (either in quality or quantity) of AMCA Nationals anywhere in the country outside of a national championship event would find it impossible to substantiate such a claim because the entry list for round seven of the Shock Absorber Therapy Track Championship is once again stacked with talent. Along with Australian champion Matt Hardy, the line-up also includes established front runners and feature race winners such as Steve Potts, Lee McKinnell, Steve Price, Russ Hardy, Nathan Durston, Thomas Vickery and dual state titleholder Tony Blanch, while Bruce Marshall has drawn on his wealth of experience to quickly establish himself as a serious threat in a very short time. With 25 drivers nominated and lapped traffic certain to become a factor, the 20-lap feature event will deliver action aplenty.

With the top ten finishers from the previous round amongst the nominations, round 10 of the Stockmans Civil and Plant Lightning Sprint Club Championship is shaping as another hotly contested event. In round nine it was Jim Kennedy who prevailed in the feature over Wayne Iacono and Keith Blatch, but with the likes of Dave Fanning, Kirsty Kelly, Sean Iacono and state champ Jason Rae also amongst the entries, there are myriad podium permutations that could play out.

An interesting, and very welcome, addition to the Compact Speedcar nominations this weekend is Michael Kendall, a five-time New Zealand Midget champion and a winner of the Archerfield Midget Track Championship on multiple occasions. Assuming he has good equipment at his disposal, there is little doubt that Kendall will be a very serious threat to Bodie Smith, Robbie Stewart and the rest of the category regulars.

The Super Sedan-mounted contingent of Barry Craft, Ron Hornbuckle, Glenn Willmott, Keith Craft. Ben Robertson, Colin Kaine and Les Eisenmenger are expected to dominate the results in the Open Sedan action, while the RSA Sedan events will again see a small contingent of Outlaw Sedans taking on the Limited Sedans in a combined field. Whilst Michael Taylor, Wayne Kirkman, Zane Williams and Glen Lesslie should dominate the results, both Adrian Browne and Aaron Buchanan have proven themselves more than capable of mixing it with their V8 rivals.

Gates open at 4.00pm with early racing from 5.00pm, while the main program, which also features the talented young stars of the Formula 500 Juniors and the debut appearance of blast-from-the-past Nostalgia Sedans, will get underway from 6.00pm.