Title time for the Victorian Compact Speedcars at Wangaratta

Title time for the Victorian Compact Speedcars at Wangaratta 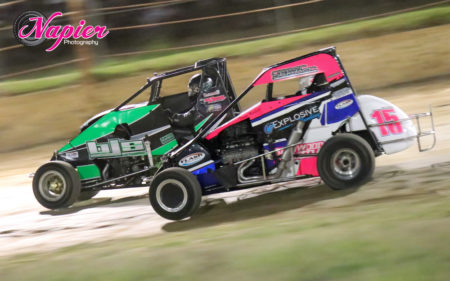 Joining Heaton from New South Wales will be Kyle Sharpe, Brad Forgeard and Shaun Robinson. Sharpe most recently involved in the Easter Showdown and champing at the bit to get it on once again with the Victorians. Heaton of course with the target on his back being the national and Victorian champion has no intentions of returning to home without the state championship trophy.

Victorians led by Justin Paull are busy this week planning and tinkering with race cars in order to capture the number one moniker, Paull who won both events at Easter is primed and keen to go, especially with long time Paull family sponsor Ringwood Mazda onboard as naming rights sponsor. Tania Hallett whom is Justin’s sister, also supported by Ringwood Mazda is very capable of winning the big one also and she heads to Wangaratta after making a strong showing at Rosedale and Bairnsdale.

Tania spoke of Ringwood Mazda’s involvement. “Our family have been employee’s and sponsored race drivers for Ringwood Mazda for a long time. On the back of recent efforts by our hard-working Club and it’s committee and competitors we are have strong momentum as interested racers think about joining our class. Numbers have increased upon last season and others are soon to join us. Having Ringwood Mazda as a naming rights sponsor for our $1000 to win state title is proof that sponsors want to be involved with exciting and well promoted categories.” Shared Hallett.

Mark Cecil, Ash Booker and Michael Conway are three other strong Victorians in the mix. Cecil from the Goulburn Valley is virtually a local to Wangaratta and is no stranger to winning big title events in Speedway. Booker just like Cecil has a similar winning history and both those drivers are names to watch on Saturday. Conway is new to the class however has won at Wangaratta this season and brings that confidence with him to the title event.

Scott Thomson from Wangaratta, Daniel James another Goulburn Valley racer add more local flavour to the line-up and two drivers keen to perform in front of friends and family.

With seven Yamaha powered machines up against 6 Suzuki’s, 2 Kawasaki’s and a Honda the 1000cc plus class of racing will once again provide the crowd with fast racing and a different audio atmosphere amongst a night of Sedan racing and with sixteen fierce racers on the clay, any number of drivers could be this season’s ‘Ringwood Mazda’ Victorian Compact Speedcar champion.