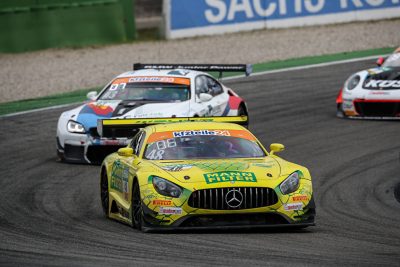 MANN-FILTER Team HTP Motorsport wins the teams’ classification of the 2018 ADAC GT Masters. In the thrilling finale at the Hockenheimring, the two Mercedes-AMG GT3s with Maximilian Götz and Markus Pommer (both GER) as well as Maximilian Buhk (GER) and Indy Dontje (NED) secured the title in the teams’ competition with a margin of 25 points. In the drivers’ standings, Götz and Pommer had to accept a considerable setback: Götz having secured the best situation in the battle for the drivers’ title with pole position, he became innocently involved in a collision on the opening lap of the final race and thus lost all his title chances together with teammate Pommer. The duo Buhk/Dontje with the #48 Mercedes-AMG GT3 claimed third place in the race on Sunday and thus concluded a successful season in the league of the super sports cars.

The strong season by MANN-FILTER Team HTP Motorsport in the ADAC GT Masters was successfully concluded in the finale at the Hockenheimring. The Mercedes-AMG Customer Racing team already decided the battle for the teams’ title in the penultimate race of the season on Saturday. With the #47 Mercedes-AMG GT3, Markus Pommer started the one-hour race from fourth place on the grid. In the turbulent opening stage, the 27-year-old initially dropped back to seventh position. After the driver change, Maximilian Götz was able to make up for ground lost and moved up to fourth place. In the high-class final stage, the Mercedes-AMG Driver continued to apply pressure and showed excellent racing with hard, but fair duels. Fourth place for Götz/Pommer added twelve valuable points for MANN-FILTER Team HTP Motorsport in the teams’ championship, putting them beyond reach in the standings prior to the race on Sunday. By finishing in tenth place, Patrick Assenheimer (GER) and Dominik Baumann (AUT) also scored points with the #84 AutoArena Motorsport Mercedes-AMG GT3. The duo also was classified third in the junior cup.

Prior to the final race of the season on Sunday, Götz/Pommer were ten points down on the leaders and thus still had a good perspective to mount a challenge for the drivers’ title. Maximilian Götz was accordingly motivated for qualifying in the morning in which he indeed managed to secure pole position with his final fast lap. However, his joy didn’t last long in the race that followed: right after the start, an opponent ran into the side of the German’s car in the first corner and Götz slid off the track as a result. Thus, the race and the title chances came to an early end and the disappointment after the good starting position was huge. Götz and Pommer still ended up in fourth place of the ADAC GT Masters drivers’ standings.

The final race still had a positive end thanks to the result of their teammates Maximilian Buhk and Indy Dontje. With a faultless performance, the duo still improved from seventh place on the grid onto the podium. After a good pit stop, Dontje rejoined the race in fourth place and after a strong overtaking move in the final stages, he still secured third place and thus fifth position in the end-of-season drivers’ standings together with Buhk.

Stefan Wendl, head of Mercedes-AMG Customer Racing: “I am really happy for the MANN-FILTER Team HTP Motorsport about the teams’ championship and congratulate them on a fantastic season. My congratulations also to the likeable Renauer team on a well-deserved ADAC GT Masters title win. Nevertheless, we had still hoped to be in contention for the title after Maximilian Götz’s incredibly strong qualifying performance. Unfortunately, these hopes were blown after the first corner already. The race on Saturday having shown what fair and fantastic motorsport can look like, I call on the ADAC to impose higher driving standards for the future and penalise misbehaviour like on Sunday in a hard and consequent way in order to avoid costly accidents for our customer teams.”

Maximilian Götz, MANN-FILTER Team HTP Motorsport #47: “Disappointment is very, very huge. Being punted out of the race in the first corner by somebody who isn’t in contention for the championship and is racing under appeal is extremely hard. That doesn’t have much to do with motor racing. By being on pole position, we were in a very good situation to still be battling for the drivers’ title. But generally, our season has been very good. We have had many great races, yesterday’s race was a dream as well, simply motorsport the way it should be with many hard, but fair duels.”

Markus Pommer, MANN-FILTER Team HTP Motorsport #47: “This was a super season, we were always fast. It was my first year with the Mercedes-AMG GT3 and I was able to learn a lot from Max. Unfortunately, the annoying thing was that we retired three times from the last four races not because of our own faults. But my thanks go out to the entire team for a great season.”

Maximilian Buhk, MANN-FILTER Team HTP Motorsport #48: “Today, we ended on a positive note with our podium finish. First of all, I was happy to have made it through the first corner without any damage. After that, we had a good strategy and a good pit stop. Indy then also showed a strong overtaking move for third place. All in all, we can be happy with the season when considering how strong this series is. At the end of the day, some slight mistakes in the course of the season cost us the chance of still being in a better position for the championship at the end of the season.”

Indy Dontje, MANN-FILTER Team HTP Motorsport #48: “Apart from a few mistakes that have cost us points, the season went well. Nevertheless, fifth place in the drivers’ standings is a good achievement in this strong league. Also, winning the teams’ title together with MANN-FILTER Team HTP Motorsport and the Mercedes-AMG GT3 is super. That was a top performance by the entire team.”

Norbert Brückner, team principal MANN-FILTER Team HTP Motorsport: “The race on Sunday obviously was extremely unfortunate and disappointing and I feel really sorry for Maximilian and Markus. Notwithstanding, we are happy with the success in the teams’ championship, that is an outstanding achievement. For that, I thank our drivers, the entire team and our sponsors, first and foremost MANN-FILTER. With Mercedes-AMG, we have an ideal partner on the technical side and the Mercedes-AMG GT3 is a car that can challenge for victory at every circuit. Next season, we will be attacking at maximum level again!”