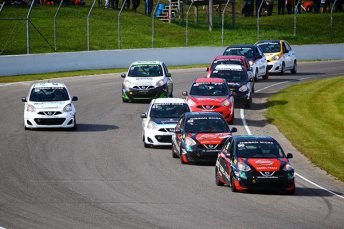 The Quebec circuit will host the 11th and final rounds of the 2017 Micra Cup season. Three drivers are mathematically in contention to win the crown but 2016 champion Xavier Coupal, who is currently in third place, would need luck on his side in order to defend his title.

Championship leader Olivier Bédard and Kevin King are expected to battle it out for 2017 title. The 2017 season is the third year in a row where the championship has been crowned at the final round.

Inaugural 2015 champion Bédard leads the points with 342 compared to King on 315. If King is victorious in both races, Bédard must at least finish third in one race and fourth in the other in order to claim another championship title.

Nissan Micra Cup drivers will be on the track a total of six times at this weekend’s event. Two practice sessions will be held on Friday, followed by a qualifying session on Saturday from 9:25-9:45 am (local time) and the first race at 1:15 pm On Sunday, the day will kick off with a qualifying session from 9:00-9:15 am, ahead of the final race of the season, which is set to start at 1:15 pm.

Melbourne, Australia – A series of tyre failures have overshadowed the strong one-lap pace shown by Nissan Motorsport at the Sandown 500 event last weekend.

The morning started strongly for Michael Caruso and Dean Fiore, as the No. 23 Nissan NISMO entry topped the warm-up session. The crew’s one-lap pace had been competitive throughout the previous sessions, with the Nissan squad also fastest earlier in the weekend.

But during the race, Caruso and Fiore were running 14th just five laps from home when they suffered a tyre failure which dropped him down to 21st.

Having also topped the times earlier in the weekend, Rick Kelly was unable to convert that speed across the race duration the afternoon. The No. 15 Altima, shared with David Wall, was forced onto a conservative set-up following a tyre failure in qualifying and finished 15th.

Despite taking out the Super2 round win earlier in the day, it proved to be a tough afternoon for Jack Le Brocq alongside Todd Kelly. The No.7 entry finished 18th after a number of issues compromised their race including two tyre failures.

Simona De Silvestro started her first ever Sandown 500 while suffering the effects of a stomach bug. The illness had plagued the No.78 driver across the weekend. De Silvestro and co-driver David Russell completed a tough afternoon with a 20th place result.