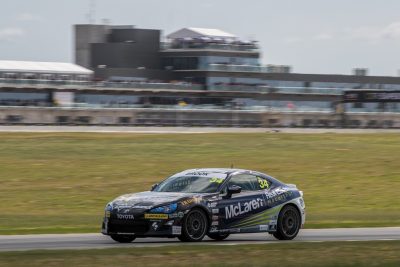 McLaren Real Estate backed racer Tim Brook has maintained his championship lead in the Toyota 86 Racing Series following the third round of the series at The Bend Motorsport Park in South Australia.

Brook claimed the series lead at Townsville in Round 2, dominating the weekend to claim pole position and all three race wins to charge to the top of the title standings.

He then consolidated that position at The Bend, with three important results gaining the Sydney-based racer valuable points in his question to win the 2018 Toyota 86 Racing Series.

“We always headed to The Bend knowing it was going to be a tough weekend, because the competition in this series is so close,” said Brook.

Brook proved among the pacesetters during practice, before a setup change prior to qualifying proved a step in the wrong direction.

Qualifying 19th, Brook raced his way to the verges of the top ten, carving through the midfield including a door to door battle with Bathurst 1000 winner Jason Bright.

He made further progress in Race 2, before rising to seventh in the final race where he chased down and caught the leading group in the closing laps.

“We sort of ended the weekend where we should have started it, but the good thing is the pace was there,” Brook explained.

“We went the wrong way with setup for qualifying and that really cost us, but it’s good that we were able to solve that and from then on the car had good pace.

“In terms of the racing, the track is great – there’s lots of opportunities to pass and it’s tricky enough to catch you out.

“Luckily we got through it all okay and picked up some solid points, and can now look towards Sandown in a couple of weeks.”

The Toyota 86 Racing Series returns to Victoria for its final visit to the southern state where it will support the Virgin Australia Supercars Championship at the Rabble.club Sandown 500.

As the first endurance of three Supercars endurance events, Sandown is one of the biggest motor races on the Australian calendar.

“Sandown is a very different style of track to The Bend,” explained Brook.

“At Sandown you’ve got two long straights and some very short corners, more like Townsville than The Bend.

“With any luck that will suit out car, so we’ll head there to try and score some more points and hopefully win another race or two!”