Title decider on the Coffs Coast

Title decider on the Coffs Coast 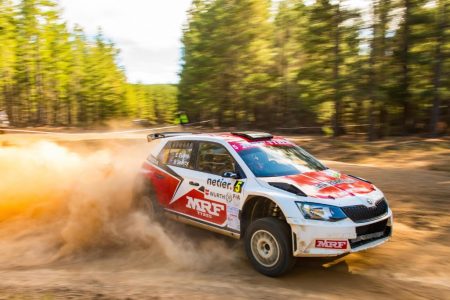 The CAMS Australian Rally Championship will see off a successful 2018 when 27 crews hit the Coffs Coast this weekend to take on Kennards Hire Rally Australia.

With four crews in the running for title honours, anything can happen throughout the four-day event, which will see competitors covering more than 318 kilometres across 24 special stages.

At the top of the standings are Skoda Fabia R5 pilots Eli Evans and Ben Searcy, with the championship advantage to Evans and a 57-point lead.

Despite Evans and co-driver Ben Searcy in the box seat for his fourth national title, he will not be taking the final round lightly, with the Victorian aiming to finish the season with a victory.

“Ben and I will give it our best shot to try and win the event rather than just protect the championship, because we don’t want to finish second third or fourth,” Evans said.

“I want to win and that is what we are going to try and do.”

His closest rival comes in the form of Harry Bates and co-driver John McCarthy behind the wheel of the Toyota GAZOO Racing Australia Yaris AP4.

“I’m really looking forward to this weekend and getting out there again because it feels like the Adelaide Hills Rally was forever ago now,” Bates said.

“It’s not unforeseeable that things can go wrong in this incredibly challenging rally, so we will certainly be putting our best foot forward and see if we can capitalise on any mistake from Eli.”

Sitting behind Bates is the Contel Communications pair of Steve Glenney and Andy Sarandis, with the drivers now competing in a Skoda Fabia R5 after their trusty Subaru was unable to be fixed in time for the final round.

2016 ARC champion Molly Taylor and co-driver Malcolm Read are also excited about the weekend ahead.

“Realistically, Eli is in the box seat, but timewise this is the longest rally in our domestic championship,” Taylor said.

“As we’ve seen throughout the series, it can produce a lot of attrition, so everything is up for grabs right across the top four teams.

“We’ll be focusing on our own performance rather than what the others are doing – that way we know we’ve got every chance of producing something special.”

With four crews in the hunt for the ARC title, there are five teams in the running for the ARC2 title, with Andrew Penny leading the field ahead of fellow New South Welshmen and 2018 regulars Adam Kaplan and Haowen Chu.

Each of the ARC2 crews will receive a new set of MRF tyres ahead of their grand final, with the tyre manufacturer represented across the national ARC field.

Chu and Kaplan will also battle for the CAMS ARC 2WD Championship, with Kaplan 16 points clear of 2018 debutant, Chu. Kaplan returns to his trusty Mazda, with his Nissan 370Z currently undertaking repairs after the last round in South Australia.

There are also are two other domestic cups competing on the Coffs Coast with five crews taking part in the R6 Digital Cup, and a further five crews competing in the Classic Cup.

In the ARC Co-driver’s Championship, Searcy leads the way over McCarthy, while Read occupies third outright.

While the Kennards Hire Rally Australia will close the 2018 ARC season, the New South Wales event will also be hosting the season finale for the FIA World Rally Championship.

Like the ARC, the WRC will go right down to the wire with three drivers all vying for the title including five-time world champion Sébastien Ogier, Thierry Neuville and Ott Tänak headlining the 27-crew field.

The first three sections of the Kennards Hire Rally Australia will take place from 7am AEDT on Friday 16 November, before competitors take part in sections four to six on Saturday and the championship will complete on Sunday as the remaining sections to occur.