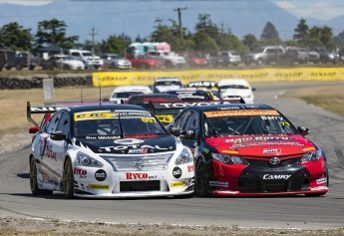 It’ll be a clean slate for competitors as the opening round of the BNT V8s kicks off at Pukekohe this weekend.

With reigning champion Simon Evans and Smeg Racing not competing this season, it leaves a number of contenders vying for the top spot by season end.

After a difficult season in 2016/17, Nick Ross and his Total Oils Nissan Altima will be looking to lock in consistent results to achieve a good championship result in the 2017/18 season.

“We did have a few reliability issues last season which was frustrating, because when the car was running well we were making steady progress on track and getting some good results,” says Ross.

“For me, and I guess everyone else it’ll all be about limiting the mistakes. Finishing races and being on the podium will be key to a good championship result.”

Team Richards Motorsport will again run two Toyota Camry’s this season, one for category stalwart Jason Bargwanna and returning V8 star, Kiwi Andre Heimgartner. The third Toyota Camry of Scott Taylor is parked up while the Australian driver recovers from a back injury sustained in a crash at Sydney Motorsport Park in August.

The class one field also welcomes rookie Matthew Tubbs who will compete in a Holden Commodore with former class two front runner Brad Lathrope lining up in a Ford Falcon.

Chasing MacDonald will be class two returnees Nick Farrier and Chelsea Herbert who both scored good results last season and both are wanting to make more visits to the podium.

“It was my first full season last year, and most of the tracks I had never been to. So each weekend it was really about learning the tracks and not so much the car,” says Farrier.

“With that all out of the way now, this season I can concentrate on fine tuning the car and getting ourselves further up the grid.”

“The cars are all pretty close on the track and the drivers are all very good, so I need to be able to maximize the opportunities and race well to continue getting those good results.”

Christchurch driver Justin Ashwell will make his full time debut in the championship having contested the two South Island rounds in 2016/17, and back for more is the ever likeable Rob Wallace from Tauranga who returns to Pukekohe in his Ford Falcon with support from John Bull Footwear.

Bronson Porter and his Holden Commodore will also re-join the class two field, as well as Alan McCarrison in a Ford Falcon.

Two rookies will make their debuts at Pukekohe, with Brock Timperley stepping up from the Mazda Pro 7 Championship, and Taranaki’s Matthew Podjursky making the step up from Formula First.

The class three Invitation field is once again headed by last seasons champion Nigel Karl, and at Pukekohe he will be chased by a host of BMW’s from Andrew Nugent, Andre Mortimer, Matt Griffin and Warwick Mortimer.