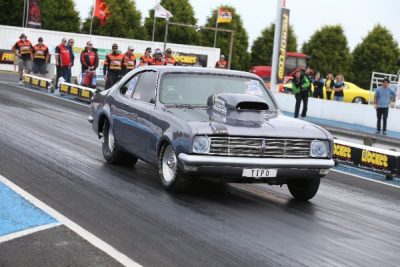 Defending Super Sedan champion George Tipouikidis and his Holden HK Monaro will be well and truly on a mission at the upcoming MacTrack Westernationals at the Perth Motorplex (March 3 and 4).

The racer from Virginia in South Australia heads to the penultimate round of the 2017/2018 Summit Racing Equipment Sportsman Series on 200 points and equal fourth on the ladder – 100 points shy of the points cap.

“We are going to Perth as we need to get some more points – with us sitting on only 200 points with two rounds to go, we want to get at least 80 points (runner-up) or even win to get 100 points so we can be even with the rest of the guys heading to the Grand Final in Adelaide (March 23 and 24),” Tipouikidis said.

“I am a little bit down the ladder, so this trip to Perth is really important, we need more points if we are going to have a proper crack at the Grand Final!

“We will be heading there with our same preparation as always and hopefully with a little bit of luck, we can come home with a trophy. It can be first or second, I am not really fussed, either one is fine! It is always good to come back with a little bit of silverware!” he laughed.

The defending champ’s season got off to a delayed start, but it hasn’t been without its highlights.

“Overall it has been a good season – I had to miss out on the first few meetings at Darwin and Alice Springs and then at Mildura I had some issues with the gearbox,” said Tipouikidis.

“Then we went on to Adelaide’s round and we won, which was nice. Wins are a bonus really, we do this more to enjoy ourselves and get away from work for a few days!

“It is a bit of a trip to Perth so we will get four days off so that isn’t too bad!” he laughed.

“It has been a good season so far, we have enjoyed ourselves. The only thing has been that if we had a few more points, I would be a bit happier. But that is how it goes and we will be doing what we can at Perth to get some more points on the board.”

Tipouikdis’ Monaro will travel to the event as part of a five-car contingent from Melbourne and Adelaide.

Round eight of the 2017/2018 Summit Racing Equipment Sportsman Series, the MacTrack Westernationals, will be held at the Perth Motorplex on March 3 and 4, 2018. For further information, visit www.andra.com.au or www.motorplex.com.au