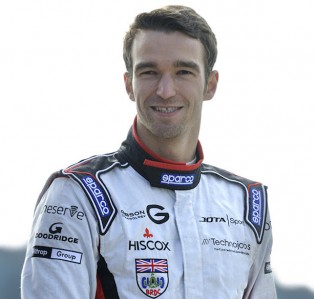 Tincknell, 24, has been cruelly denied the coveted ELMS Drivers’ “crown” for the past two years.

Tincknell will race JOTA’s venerable Gibson-Nissan with Simon Dolan and Giedo van der Garde, in this year’s six-race series that begins on “home” soil for Harry and JOTA at Silverstone on 16 April.

Despite claiming more top-three podium race finishes over the past two years than any other non JOTA driver, Tincknell has ultimately finished second (2014) and third (2015) in the final championship standings – cruelly denied title honours by just four-points on both occasions.

After switching from a successful single-seater career in 2014 which had seen Harry achieve multiple race wins in Formula Renault and Formula Three throughout Europe, his progress in the sports car category has been meteoric which led to him becoming a “factory” Nissan NISMO driver last year for its LM P1 development and race programme.

In addition, Tincknell won LM P2, and set the fastest class race lap, for JOTA Sport in the Six Hours of Spa-Francorchamps and competed in the Le Mans 24 Hours for the “factory” Nissan NISMO team last June.