Tight at the top in BNT V8s

Tight at the top in BNT V8s 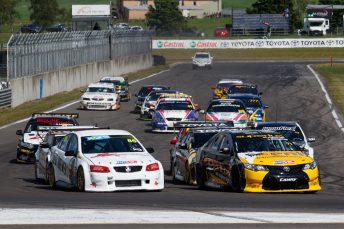 After two rounds of the BNT V8s, the championship is still wide open with anything possible as round three gets underway this weekend at Ruapuna.

Australian driver Jason Bargwanna clinched the round wins at both Pukekohe and Taupo and leads the championship by 24 points from his Richards Team Motorsport teammate, Andre Heimgartner.

Both drivers have claimed wins at Ruapuna in the past and both are eager to get to the fast, yet tight and technical Ruapuna circuit.

“I really like Ruapuna, I’ve had wins there before and we won there last year,” said Bargwanna.

“I think these next couple of rounds down south, there is always the potential for weather, we’re only two rounds into this championship, and anything can happen.”

Heimgartner, who is preparing for his upcoming season in the Virgin Australia Supercars Championship, says he’s pleased with how quickly he’s gelled into his new Toyota Camry TLX and his new team.

“The Richards Toyota Team are a really solid bunch of guys and they made it very easy for me to come in and be on the money straight away. I’ve learnt alot about the car over the past two rounds and am looking forward to seeing what I can do down south,” said Heimgartner.

Though happy with his on track performances so far, Heimgartner says the Toyota Camry is a different beast to the Holden Commodore SuperTourer he has driven in previous seasons.

“The Camry is very loose compared to the ST, you really have to drive it on the edge to get the speed out of it. The way you set the car up is different as well, so I’m just getting my head wrapped around it.”

Chasing down Bargwanna in the race for the title, Heimgartner says always having a good round will be important.

“It is definitley about consistency this year. Myself and Bargs being so close means you can’t have a bad round. I’m looking forward to some tight racing.”

“We go ok at Ruapuna. It’s one of those circuits like Taupo, you have to be on it from the get go, otherwise you’re catching up all weekend,” says Ross.

Young Australian driver Jack Smith has also starred in recent rounds. The current Australian V8 Touring Car Champion showed impressive signs of speed at Taupo, qualifying second, recording two third placings and a fifth. With experienced teammate Lance Hughes in an identical Hamilton Motorsports Holden Commodore to share data with, he will be one to watch at Ruapuna.

Class two of the championship is currently being lead by defending champion Liam MacDonald of Invercargill.

MacDonald dominated at Pukekohe with a clean sweep of all three races, and despite a couple of hiccups at Taupo, still managed to win the round.

Claiming their debut wins in the class at Taupo were Chelsea Herbert and rookie Brock Timperley. Both drivers thrilled to get their first wins.

“Coming into the class I didn’t think a win would happen this quickly, but after finding we had decent pace at round one, I believed it was possible even though my results there didn’t show it,” says Timperley.

Sitting fourth in points and just 135 from the lead is Christchurch racer and championship rookie Justin Ashwell.

In his first full season, it has been a baptism of fire, having had minimal experience at Pukekohe and Taupo.

As he heads to his home round at Ruapuna, Ashwell has more confidence racing in a familiar environment.

“Knowing the track will help us. This will also give us a better gauge on other cars in comparison to ours,” says Ashwell.