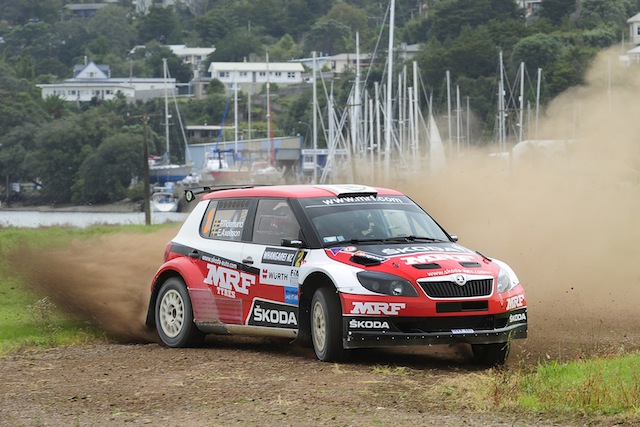 The test precedes the three-day competition that covers 282.2km of Whangarei and Northland rural roads.

“Yes we are very happy to be fastest although it will be tomorrow that matters,” commented Tidemand.

A total of 18 of the 49 entered in this weekend’s multi-category event participated this morning.

Teams now turn their attention to the official start. The cars will be on display at Te Matau ā Pohe (the bridge adjacent to Pohe Island) for pre-start activities and the driver signing session – from 4:45pm.

That is followed at 6pm with a ceremonial start before the first of two competitive Hella Super Special tests, from 7pm.

The cars are then put in to a secure overnight park ahead of the competition proper.

Sunday’s additional six stages use three groups of road south of Whangarei. Each test varies from past editions of the event – creating an entire new set of road records.

The cars and crew then return to the Whangarei Quayside town basin for the 3pm ceremonial finish.

Along with the celebratory national anthem of the winning team, the top-three finishers are further recognised by their nation’s flag being shown adjacent to the winners’ dais.

Children under the age of 15 are free with a paying adult and paddock parking is available at some locations for a gold coin donation.

A share of all spectator ticket revenue goes to the local community groups that help run the spectator viewing areas.

A rally map is available free to download from the spectator info section of the website, or it can be collected from rally headquarters at Quayside town basin (from 15th April).

It illustrates prime spectating areas with detailed timings. Spectators are reminded to follow the instructions of marshals and ensure they stand well clear of the road’s edge – and be inside the taped off viewing areas.