Tickford Racing and ACT Fence Hire to new heights in 2019

Tickford Racing and ACT Fence Hire to new heights in 2019 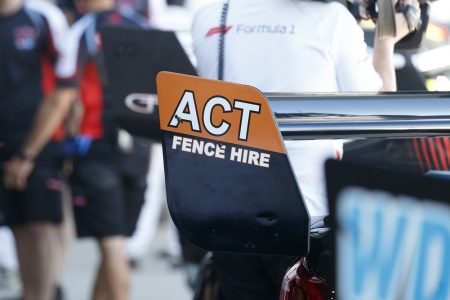 Temporary fencing company ACT Fence Hire has increased its support of Tickford Racing ahead of the 2019 Virgin Australia Supercars Championship, continuing the partnership that began in early 2018.

ACT Fence Hire first linked up with the team in 2017, when company director Angelo Turcin received a Tickford-engineered Bathurst 77 Special Mustang. The relationship developed from there into a business venture for ACT Fence Hire, which will continue this year, the Canberra-based company’s logo appearing on the wing endplates of Car 55 for the entire 2019 season.

“We were very excited to renew with Tickford Racing for another year,” Turcin said. “For a smaller business, you don’t get many opportunities like this so we’re thrilled to be involved, and we’re very excited that we’ll be on Chaz’s Supercheap Auto Mustang. It seems like every time you go shopping you see a photo of him, so it’s great to be associated with a driver like him.

“Partnering with the team is especially important to me because our partnership helps bring Supercars exposure back to Canberra a bit,” he added. “It’s something I’m very passionate about, so I’m really happy we can have that connection with the sport.”

“We’re very pleased to have ACT Fence Hire continue with us in 2019,” said Edwards. “Angelo is one of the most enthusiastic supporters of what we do and we really appreciate that passion. He’s a familiar face in our garage, always rocks up with a smile and has even figured a way into helping the crew when he can at track. He enjoys the exposure ACT Fence Hire receives in the partnership, and we look forward to having them around again in 2019.”

Tickford Racing will take to the circuit February 14 at Phillip Island for a preseason test with its four team-prepared Mustang Supercars, ahead of the 2019 season opening Adelaide 500, February 28 – March 3.

Serving the Australian Capital Territory and its surrounding regions since 2011, ACT Fence Hire provides temporary fencing services for all kinds of projects from housing construction to sporting events and special events. Offering delivery, installation, dismantling, and removal of temporary fencing at a competitive price, ACT Fence Hire caters to projects of any size and timeframe, providing sturdy and portable temporary fences that are safe for workers and the public alike.