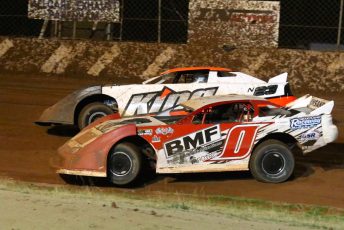 The Super Sedans return once again to Rushworth Speedway this Saturday night to via for top honours in the Victorian Saloon Car Federation state championship hosted by the Goulburn Valley Auto Club with top guns from Queensland, New South Wales, South Australia and Tasmania keen to take the silverware from the Garden state to theirs.

Callum Harper from Tasmania was the Australian champion last season, he is back to try again to win the Victorian title whilst Corey Smith who competed so well at the Gold Rush event in March returns also.

Brad Wicks another from the Bendigo area has never won the Victorian title yet has the equipment to do so just like Ash Bergmeier also from Bendigo. They along with Queenslander Wayne Randall and New South Welshman Lachlan Onley are other competitors to watch.

The powerful machines always get the crowd buzzing as they come out of turn two and four with the left front wheel off the ground or barely touching the track at all.

Dirt Modifieds keep the V8 action rumbling with a number of potential winners in their field and local runners keen to hold Daryl Hickson, Mike Burke and Brett Clarke out of top spot. The local competitors include Darren and Paul Tindal, Steve Hopkins and Steve Lodwick.

Club Sedan action is packed with increased fields for this weekend and as usual the fans will get right behind their favourites with winners difficult to pick in each class.