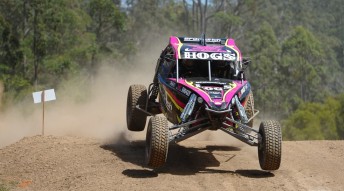 A tight three-way fight for the 2014 Australian Off Road Championship is now set for the final event of the season after the category was turned on its head following a challenging two days of competition last weekend at Round 4 on the Coffs Coast of New South Wales.

But the fight for the Aus #1 plate come October will ultimately be decided between current reigning champion Rentsch, and Championship frontrunners Beau Robinson (#402) from Tonka Outer Bounds Racing and Jack Rhodes (#91) from Rhodes Racing.

Since the last Championship points update, Robinson has jumped up one place on the leaderboard to second outright after his eighth-place finish at Coffs Harbour, while Rhodes has slipped back one place to third due to completing only one section of the NSW event after breaking a tie rod on the final day of competition.

With a maximum of 350 points on offer at Round 5 next month, the TJM Lockyer 300 in Queensland, all three drivers still have a mathematical chance at the title, where the reigning champion will head into the event only 287 points ahead of Robinson and 315 points ahead of Rhodes.

The Pro Buggy versus Trophy Truck battle will also be further ignited heading in to the final event thanks to Greg Gartner and Jamie Jennings (#403) who jump up three places to fourth outright after their top five finish at Coffs Harbour. Making it two buggies and two trophy trucks within the top four outright, Gartner also has a mathematical chance of an outright Championship podium finish should his rivals in front suffer misfortune on track.

There has been movement within the rest of top 10 as well, with Tony Fehlhaber’s fourth-place finish at Round 4 jumping the Prolite leader up to fifth outright, followed by Michael Marson (#32) in sixth, Matt Hanson (#3) in seventh, Travis Robinson (#13) in eighth, Matthew Martin (#121) up to ninth and Steven Sanderson (#447) in 10th.

In the classes, a close battle is ensuing in Extreme 2WD between first placed Robinson and Gartner a close second, as well as in the Prolite Buggy class between current class leader Fehlhaber and second-placed Martin – who’s jump up the ranks follows his and daughter Kerrie’s second outright finish on the Coffs Coast and first career AORC podium finish.

To find out how your favourite teams have faired after competing at Round 4, the Pedders Suspension Coffs Coast 400, head to the results page on the website for a full breakdown of both the Outright and Class points leaderboards, plus the placings for both driver and navigator honours: www.aorc.com.au/results

The Australian Off Road Championship next heads to the fifth and final event of the season, the TJM Lockyer 300 in the Lockyer Valley, Queensland, held on the weekend of October 18 and 19.

For more information on the grand finale, head to http://www.aorc.com.au/events/lockyer-300/