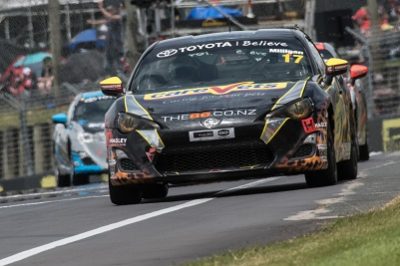 The 2017-2018 Toyota 86 Championship comes down to the wire this weekend at Hampton Downs in the northern Waikato – and the margins are close.

The final round sees the leading pack ranked as closely as they ever have been. Earlier in the Championship just two points separated leader Jack Milligan (CareVets Racing) from second place as he faltered on tracks that could be considered his ‘home’ venues.

With a last surge, Milligan (916) stands 30 points clear of second-placed Scott (886), while third-placed Connor Adam, who led the Championship at mid-point, is still in the running with 793 points. Close behind and a clear leader in the rookie standings is Jordan Baldwin.

“It’s important to be consistent, to always be there, and keep banking points. The competition is pretty strong this year, so I’m happy with how the overall Championship has gone,” Milligan said.

In the current Championship, the racing has been close all the way from the opening races at the ITM 400 in November.

There, former champion Tom Alexander and 2016-2017 rookie title winner Jack Milligan of the CareVets Racing team shared the wins, setting the scene for the title fight through the early rounds.

Alexander’s challenge faded gradually after the Championship hit Taupo for round two in December 2017, where he was only able to score one win.

“We just can’t work out where the car speed has gone, it’s got us baffled,” Alexander said.

Kicking off the New Year at Ruapuna, the same fast four continued to rack up the points, with rookie Jordan Baldwin grabbing two podium finishes and Ransley taking his first 86 Championship win. A week later disaster struck for Ransley, who was spun off the track at high speed and totalled his car in the second race at Teretonga near Invercargill.

Ransley, who is coached by Andy Neale, said he was devastated by the crash.

“We were challenging for some good points and a great finish to the weekend then all of a sudden nothing.”

Race wins went to Michael Scott and Jack Milligan, who said he was ‘happy enough’ with his form.

At the New Zealand Grand Prix in mid-February, Milligan rebounded to top form. He and Scott were locked in battle with Milligan winning the first race and Scott the following two.

Almost exactly a month later, the Championship arrives at Hampton Downs for the final round.
This 2.63 kilometre circuit is rated highly by drivers due to its challenging layout – in particular the blind approaches to the first turn and the mid-lap downhill hairpin.

“It’s a circuit that really rewards a fine touch and careful balance on brake and accelerator, which is how you get the best out of an 86,” said Milligan.

With three races remaining, Milligan and Scott have the same number of race wins. Milligan’s points advantage comes with a solid six additional podium finishes (he has been second three times and finished third three times). A total of 19 drivers have raced some or all rounds of this year’s championship including two international entries, Dylan Gulson and Cameron Hill, who contested the first round in November 2017. One further addition to the entry list is Matt Griffin, who joins the Championship for its final round with a view to racing a full season in 2018-2019.