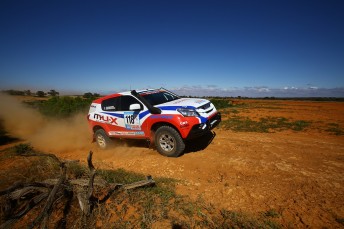 Isuzu Motorsports’ Adrian Di Lallo continues to nip at the heels of the frontrunners in the 2014 Australasian Safari, holding down fifth in the event being run in his home state of Western Australia.

Di Lallo and co-driver Roger ‘Roj’ Pedersen and their production-class Isuzu MU-X wagon are also first in their class, while Thailand’s Olan Sornsirirat and Veerachai Thorangkoon – the third team in the official ‘Isuzu trio’ – are second in the same class, and seventh outright in their D-MAX ute.

Competitors tackled two stages of the seven-day cross-country rally today after a 200km transport from their overnight bivouac in the north-west coastal town of Exmouth to the start of the first competition stage. That stage, Yanrey, was nearly 161km, while the afternoon stage was the 208.77km Emu Creek/Winning.

“It was an early start this morning and a long drive to the start, so all in all, it was a very challenging and long day,” Di Lallo says.

“The last two days have been like Dakar days – rough and tough. We damaged a drive component on the rough terrain and I had to complete the second stage today in two-wheel drive. I’m surprised with the times and happy we did so well, considering what we went through.”

Co-driver Roger ‘Roj’ Pedersen had an even better reason to celebrate the result after what he described as a long, long day!

“We’re plugging along and having a go but not pushing the car beyond its limit. I’ve sat in a lot of race cars and I have to say the MU-X is a great car. For the second day in a row I didn’t get us lost, so the big fella bought me an ice cream!”

Team leaders Bruce Garland and Harry Suzuki were back in action today, after enforced time off (yesterday, Day Four) fixing an electrical fault in their Dakar-spec Isuzu D-MAX ute.

They posted some top 10 times in their return to competition despite the rough and dusty conditions, but are disappointed to be out of contention. Their high-performance version of the Isuzu workhorse stopped 37km into the first stage on Day Three and needed to be towed to service, but the problem took longer to fix than expected.

“It was an electrical issue that affected the engine timing, which is why it cut out. Bloody frustrating!” Garland says, admitting that he and Suzuki are now driving simply to get to the finish – and to support their teammates.

“I’m really proud of Adrian and Roj, and the other guys. They are doing a fantastic job. Four of our five Isuzus still running and in contention for a strong finish. Just wish it was five out of five. We’ll be doing our best to support them through to the end.”

Aside from the strong results posted today by the official Isuzu Motorsports entrants, the two other Isuzu crews being helped by the Garland/Suzuki team have also come home well.

The Thai-entered D-MAX crewed by Vorapot Bunchuaylua and Chupong Chaiwan is in sixth while the Isuzu MU-X being campaigned by Reg Owen and co-driver Russell Cairns, is now in 13th outright (* there is a query over his position, and all results are provisional at time of writing).

Tomorrow, competitors will leave Exmouth, which is the gateway to the Ningaloo Coast World Heritage Area, and head south to Carnarvon, where the Gascoyne River meets the Indian Ocean, around 900km north of the West Australian capital of Perth.

The 2014 Australasian Safari kicked off in Perth, with a ceremonial start last Friday night. Full competition began in Geraldton, 424km north of Perth on Sunday (September 21) and finishes in Kalbarri (592km north of Perth) on Saturday, September 27 after seven days and more than 3000km of endurance racing.

Isuzu Motorsports is a performance parts company owned by Garland and his long-time co-driver, Harry Suzuki. They also have support from Isuzu operations in Japan, Thailand and Australia, and from Toyo Tires, Royal Purple Oils and Disc Brakes Australia.