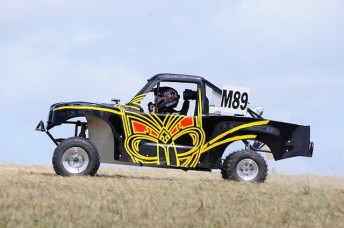 After a day of spectacular crashes and rollovers on a challenging farm course, three drivers have emerged with a shared lead in the 2015 ENZED Offroad Racing Championship.

Warren Adams made a clean sweep of racing in class six for challenge-style four wheel drives in his V8 engined Nissan.

The trio all took a maximum 72 points from the day’s racing.

Summer’s long dry spell meant a rain shower the previous day did little to dampen the track, which became dusty as racing got under way. A strong wind helped clear thick dust off the racing line but rollovers and crashes were numerous.

In class 10, Jimmie Johnston’s challenge on Scott Buckley ended when he clipped a UTV racer’s wheel and barrel-rolled his new class 10 car out of contention.

There were multiple crashes and rollovers in the opening Challenger/class five race but all the cars involved were able to return to competition in subsequent heats.

One of the most spectacular crashes brought the first heat for the Achilles Radial-backed unlimited class race cars – shared with the class nine ‘Baja’ and prototype cars – to a halt partway through the first lap.

Manukau-based Tony McCall had taken the lead off the start line in his ENZED BSL Terra V8 but was tipped over in a tight corner, bringing the race to a halt under the red flag.

The McCall car then settled upside down on the front of Hilliam’s and the latter was out of the racing with smashed front suspension.

Once righted, McCall was able to restart and made short work of the heat win.

He topped that with another win and then was third overall in the final heat where McCall,

Hogg and Buchanan went three wide into the first corner, a blind brow left hander. As the trio crested the brow McCall missed a downshift, allowing the other two to get ahead.

With no safe way to chase the leading two down in thick dust he settled for third.

“There was no way to fight back in the dust without putting myself at risk, so I decided to stick with third place and bank the points. It’s all about the championship title this year,” he said afterward.

Out front Ernie Hogg had the ‘General’, his two-seater Chev-engined Scorpion race car, flying over the fast jump back onto the start-finish straight. His winning margin was more than four seconds over Buchanan, McCall another seven seconds back.

“When you get clear air you just have to make the most of it and go as hard as you can, especially in short course heats. The car was going really well,” said Hogg afterward.

In the unlimited class trucks, there was a pitched battle between Nick Hall (ELF Toyota Hilux Pro Lite) and the Kumho Toyota Hilux trophy truck of Jono Climo.

Though the latter is heavier, its superior traction, suspension travel and power won out on the technical but fast course.

A grass-clogged radiator marred Climo’s otherwise perfect run, overheating his engine and slowing the big truck in the first heat.

In the following heat Climo ran out an emphatic winner, Hall second and 2.33 seconds behind. Grant Rosenburg damaged the nose of his new Toyota Tundra unlimited-class truck.

The third and final heat once more fell to Climo who stretched out a comfortable and commanding 11.6 second margin over Hall, with Grant Rosenburg third and 44 seconds adrift. Nick Hall posted the outright fastest lap across all classes, a 58.191.

Devlin Hill had his American car on pace to win class three for cars running engines up to 1650cc ahead of Brendon Midgely’s similar car with Lance Cargill third.

Class five for cars with engines up to 1300 cc was won by Ivan Booth ahead of Taine Carrington and Nick Magness – the latter smashing his front left suspension in one heat.

Class seven for cars with 1.0-litre water cooled or 1.2-litre VW engines was won by Fergus Crabb on debut in the class. Crabb had graduated from the youth Kiwitruck classes and was also launching a new Cougar chassis with the first water cooled engine to run in the class at national championship level.

He survived a rollover in one heat to fend off Ollie McCall and Jaden Carrington.
Challenger class was won by Campbell Witheford with Justin Williams second and Ricky Jesson third.

The Kiwitruck youth category has two classes – the ‘M’ class which was won by Boiston Horan and the J class, won by Trae Carrington from Marcus Runciman and Arron Crabb.

The next northern round of the 2015 ENZED Offroad Racing Championship is the Woodhill 100, a punishing forest endurance race that is the oldest in the sport in this country.

The Woodhill 100 is held at Queen’s Birthday Weekend on a track accessed off Trig Road, north of Parakai.