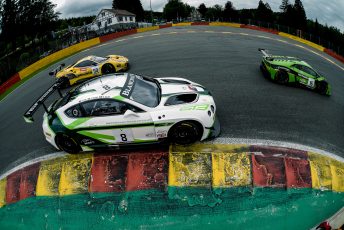 Bentley Team M-Sport, which is now leading the Blancpain Endurance Series after winning the Paul Ricard 1000kms, is aiming to complete last year’s unfinished business after it lost the lead of the race in the final laps due to a flash rainstorm. With lessons learned, the team is hoping for a successful weekend with its #7 and #8 Continental GT3s.

Alongside this pair of Bentleys, Bentley Team Abt will contest the twice-around-the-clock event at the historic Spa-Francorchamps circuit in Belgium for the first time. Nevertheless, the experienced endurance racing outfit still has its sights set on the podium.

“We have three Continental GT3s all capable of getting a great result,” commented Bentley’s Director of Motorsport Brian Gush. “That’s a good position to be in going into one of the most important races in the GT3 world.

“After losing the win last year, Bentley Motorsport has something to prove and we return to Spa with real determination. We will take forward what we have learned and share knowledge and experience between our teams.”

The pair of Bentley Team M-Sport Continental GT3s will be driven by the team’s usual Blancpain GT Series drivers. Bentley Team Abt will enter with Nürburgring 24 Hours graduates Nico Verdonck (BE), Christer Jöns (DE) and Jordan Pepper (SA). All cars and drivers will be at the official test day on Tuesday 4 July.