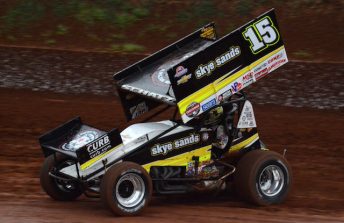 MEDIA RELEASE: The inclusion of Pennsylvania’s Lucas Wolfe in the field for round seven of the East Coast Logistics Sprintcar Track Championship at Ausdeck Patios Archerfield Speedway this Friday night (December 30) will see three Americans taking on the local stars.

With World of Outlaws champion Donny Schatz and fellow WoO hotshoe Logan Schuchart looking to bounce back from the misfortunes that befell them on Boxing Night.

In what was a very rare DNF result for Schatz, the 9-time Knoxville Nationals winner rode out a wild ride after contact from Bryan Mann.

Schuchart, meanwhile, looked to have the feature race in his keeping until an electrical fault intervened and forced him to the infield, enabling Mitchell Gee to score his maiden feature win after advancing from position 10 and withstanding the advances of two-time national champion David Murcott.

With his victory moving him into second overall in the track championship standings, Gee will be bristling with confidence when he hits the track on Friday night determined to reel in series leader and defending track champion Andrew Scheuerle, who finished third on Monday night after starting from the back row of the grid.

Gee (292) is now just 25 points behind Scheuerle on the championship table, equal with Toowoomba’s Peter Lack, who finished fourth in the previous round just two nights ago.

The most fancied of the locals heading into the Boxing Night showdown, Luke Oldfield endured the frustration of a flat tyre that ended his feature race early and he now sits fourth overall in the chase for the championship.

Despite having endured a series of setbacks so far this season Brent Kratzmann sits fifth in points at the moment and, despite his strong position in the standings, he must be frustrated beyond measure with how his season has panned out.

Having top qualified on Monday night, Kratzmann initially struck trouble at the hands of others in the Lucas Oils Dash and then found himself caught up in a first corner melee in the feature that ended his race before it even began.

Gee, Scheuerle, Murcott, Oldfield, Lack, Mann and Kratzmann will all be back in action on Friday night, along with another 25 drivers including Lachlan McHugh, Callum Walker, Paul Rooks and Australian Dirt Modified champion Kevin Britten.

It is hard to imagine that Schatz won’t back to his brilliant best and with Schuchart having established his bona fides before the gremlins set in, the inclusion of Wolfe, who is a former WoO Rookie of the Year, in the line-up amps up the pressure on the locals to again defend their territory against the American stars.

Now, if an international field of 30+ Sprintcars isn’t enough to whet your appetite, perhaps the fact that Friday night will also feature round two of the Super Sedan Summer Slam might do the trick.

There have been 30 nominations received for the event from four states, including three national championship winners and seven current or former state titleholders.

The biggest names in the game such as Darren Kane, Matt Pascoe, Michael Nicola, Lachlan Onley, Peter Nicola, Steve Jordan and South Australian ace Ryan Alexander, who is undefeated in feature races so far this season, are amongst the entries in what will be the biggest gathering of Super Sedan talent in Brisbane this season.

The two Super Sedan feature races held in Brisbane so far this season have resulted in wins for Jordan and Mark Pagel, the current points leader in the SSA Championship Series.

Add defending SSA champion Sean Black and the likes of Matthew Williams, Jason Campbell and Wayne Brims into the mix and you have the ingredients for some tasty tin top action.

But wait, there’s more, because Formula 500s also return for another showdown on the Archerfield clay, with Kristin Brown looking to continue her form resurgence with a visit to victory lane. After a frustrating start to the season, Brown finished runner-up on Monday night and is now focussed on finding the little bit of extra performance needed to find her way back to victory lane.

Of course, the biggest obstacle she faces in her victory bid is the talented bunch of racers, which includes her brother Charlie, who have made the category so exciting. Kaydon Iverson, Tristan Johnson, James Kennedy, Nathan Pronger and another dozen drivers will also be focussed on finagling first place in the feature race while Williams is racing interstate.

The grassroots racing action of the Ford versus Holden versus Sigma sedans will also be on the program.

Gates open at 4.00pm (3.30pm for online ticketholders) and early racing gets underway from 4.45pm. Sprintcar time trials will kick off at 5.30pm and the main program roars into action from 6.00pm. For more information, follow Archerfield Speedway on Facebook or head to the track website at www.brisbanespeedway.com.au to purchase online tickets and secure early entry.