Thomson aims for the top

Thomson aims for the top 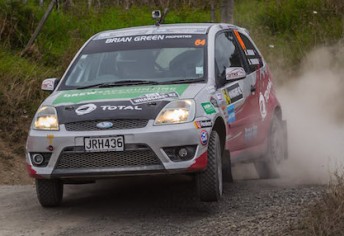 MEDIA RELEASE: Dylan Thomson, one of the New Zealand Rally Championship’s (NZRC) youngest competitors is determined to secure a podium place at the last event of the year, the Gold Rush Rally of Coromandel held this weekend near Whitianga.

The 21-year-old said finishing the year in his Ford Fiesta ST with the two-wheel-drive and rookie championship runner-up positions is his main goal, and said he’ll be pushing hard to achieve that.

“Our main focus for this event is to get second in the [two-wheel-drive and rookie] championship but we know that won’t be easy. The calibre of other drivers going head-to-head with us is extremely high, so Amy [Hudson, co-driver] and I will have to work hard,” explained Thomson.

“We’ll be developing our [pace] notes again on this rally which means we’ll be able to keep our speed up. I think the roads in Coromandel will also suit the Fiesta as they’re tight and twisty, which should also help us.”

His Ford Fiesta hasn’t required any more work, although with advice from former NZRC Champion Ben Hunt and top-race mechanic Kayne Barrie, Thomson has been able to make critical changes to his brakes.

“Both Ben [Hunt] and Kayne [Barrie] have been a huge help to me this year. Their advice has been invaluable and I certainly wouldn’t be in this position without them. We also changed the brake setup before this rally which means I’ll be more confident braking late, meaning the car will handle better and I can brake later which helps with speed,” added Thomson.

Thomson also spent some time co-driving for Hunt in an older Subaru GC8 over the break since Rally Gisborne, as the pair competed in the Catlins Rally; an iconic south island event where they battled ice, snow and other tricky conditions.

“Doing Catlins Rally was a lot of fun and it is such an awesome event. It was really good to see how Ben drives and it quickly become apparent to me why he was the NZ Rally Champion in 2015,” said Thomson.

The youngster also wanted to thank his supporters for their invaluable support during his first year, for helping the team get to all the NZRC events.

“There are so many people to thank! For this event, we have to firstly thank Kingsley [Jones] for getting us to Coromandel. Plus we obviously have to thank our amazing group of family, friends and sponsors like Total Lubricants, Riordan and West Transport and Drew Accounting Services who have also helped us out a lot. We will try and bring home a trophy for all of you!”

The Gold Rush Rally of Coromandel starts at 7.30am this Saturday at Mercury Bay Multi-sports Park, before crews compete across approximately 120 kilometres of closed special stages in the Thames and Coromandel region. The event then finishes at approximately 5.00pm at Blacksmiths Lane in Whitianga.