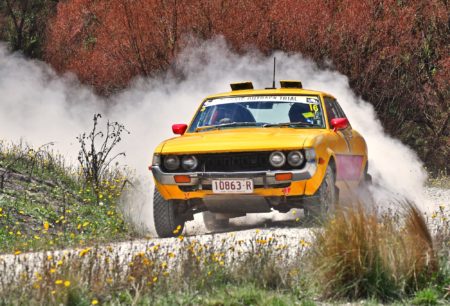 Peter Thompson and Ken Hind will be back at the AMH Automotive Group Rally of the Bay for their third year running in their bright yellow historic 1976 Celica.

Thompson moved to the Eurobodalla Shire several years ago and he considers this event his home rally and also one of his favourite motorsport events. But it hasn’t been all smooth sailing out in the Batemans Bay forests.

Last year we had a bit of a mixed event,” Thompson said. “We were going great guns until about 14 kilometers from the end of the 45km Rutherford Run to Mogo stage. I overcooked a corner and ran off the road, rolling the car. We were both fine and uninjured, but the poor little Celica was a bit worse for wear and that was our rally over,” Thompson added.

Perhaps fittingly, the Rally of the Bay will be the first event for the car and crew following the Celica’s repair.

“I’m really looking forward to getting out there again,” Thompson said. “But this time I‘ll be taking that corner nice and slow,” he joked.

“It’s great that the organisers and local community could get this event happening again and working within the COVID restrictions. Everyone is hankering to go rallying again. It’ll be very competitive out there, especially at the top of the field,” Thompson said.

Thompson has a long history in rallying, with an extensive list of events in his career as a driver. 25 Years ago he entered the 1995 Mobil 1 Round Australia Trial, one of the last great round Australia endurance rallies. He and his good friend Michael Valantine shared the driving and co driving for that event and Thompson is pleased to see Michael making the trek down from the Hunter region to compete at the Rally of the Bay.

“It’ll be 25 years, almost to the day, that Mike and I were sitting next to each other ready to start the Round Australia Trial. We were also in a similar Celica in that event and we did the full 20,000 kilometers of the rally. I really like the old Celicas and I’m looking forward to competing against Mike at the Bay, although I suspect I’ll be in his dust,” Thompson concluded.

The Celica will be back in the Forests for the AMH Automotive Group Rally of the Bay on Saturday the 4th of July.