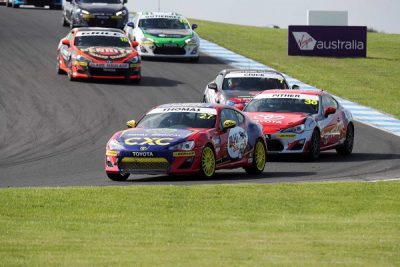 CGR Performance driver Dylan Thomas is satisfied with a top 10 position in the Toyota 86 Series points, after three frantic races in the series opener at Phillip Island on the weekend.

Driving the Hi-Tec Oils/CXC Global 86, Thomas qualified 20th but was able to improve to 15th in Race 1, before making further progress to ninth in Race 2. A 10th-place finish in Race 3 cemented 10th for the weekend out of the 39-car field.

“In qualifying, we lost out because I was on my own and didn’t have the benefit of a tow from other cars,” Thomas said.

“I always knew we would be stronger in the races, but it’s busy in the mid pack – there was barely a moment of peace in any of the races and it felt like I was swapping positions with other cars on just about every corner.

“It was a lot of fun, and to be fair to the other competitors, it was generally kept clean.”

Thomas said the result is a good base for the season, with performance improvements to come.

“During the weekend, we discovered an issue that was affecting our straight-line performance, which will be resolved for the next round and which will move us closer to the front,” Thomas said.

Driving the second Hi-Tec Oils/CXC Global entry, New Zealander Jaden Ransley also made progress during the first two races, improving from 24th on the grid to 19th in Race 1, and 17th in Race 2.

Race 3 was looking even more promising, Ransley running as high as 13th before an incident with another competitor saw him spinning down the order; he recovered to finish 24th.

“It was a lot of fun racing in the Australian series, and good to experience a new circuit,” Ransley said.

“It was a shame about the incident in the last race because I felt fast, and I was overtaking other cars.

“Overall though, it was a great experience so thanks to the CGR Performance team for having me.”

After a last-minute call-up to drive the third CGR Performance entry, Tom Muller steadily improved his lap times throughout each race and recorded finishes of 29th, 30th and 29th in each race.

“Having never driven at Phillip Island before and only having his first turn in the Toyota 86 during Friday practice, we always knew Tom was in for an uphill battle, so we’re pleased with the way he applied himself to the task, and brought the car home in one piece,” Thomas said.

The next round of the Toyota 86 Series is at Townsville, 6-8 July.

Previous Story Miller, Walsh, Rodriguez and Meakins the visitors that won at Nyora