Thirty Plus for Track Championship Round Three

Thirty Plus for Track Championship Round Three 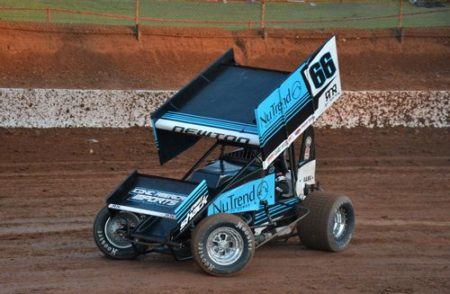 Such are the rewards of success that, given their performances though the opening weeks of the season, Luke Oldfield and Lachlan McHugh should have enjoyed a somewhat relaxed break from Sprintcar competition last weekend. Both have recorded feature race wins this season and, given the fact that neither of them has yet finished off the podium in any feature race they have contested, it is unlikely that too many changes have been made in their preparations for round three of the East Coast Logistics Track Championship at Archerfield Speedway this Saturday night (October 30). On the other hand, the 30 fellow competitors contesting round three of the East Coast Logistics Track Championship have presumably spent many a long night in the workshop in a bid to find that extra little bit of something that will slingshot them out of the pack and into the mix at the front of the field. What seems certain given the quality of racing we have seen in the opening two rounds of ECL action is that, regardless of the result, race fans can expect some very special to unfold.

Also featuring on another blockbuster Archerfield program is round two of the TFH Midget Series that will see Charlie Brown and Michael Kendall resume their epic scrap from opening night, with Wingless Sprints, Formula 500s, Lightning Sprints and Formula 500 Juniors completing the exclusively open-wheel line up.

Remarkably, there is only one other competitor amongst the Sprintcar entries who has featured on a feature race podium this season. Finishing third in the opening ECL round, Cody Maroske is, quite literally, the only local who has thus far proven capable of taking on Oldfield and McHugh. That is not to say that others haven’t impressed at various times, none more so than rookie Ryan Newton in the previous round. Having only made the transition from the Formula 500 ranks in the closing weeks of last season but buoyed by a top-five result a few weeks earlier in Toowoomba, Newton started the round two feature race on pole position after blitzing the field in the Spanloc Dash and, whilst he would ultimately finish sixth, he certainly announced his arrival as another young gun hungry for success.

Of the rest, only Aaron Kelly, Bryan Mann, Brent Kratzmann and Kevin Britten have finished inside the top five at Archerfield thus far this season with Ryan McNamara and Mark Pholi having done likewise in Toowoomba, leaving a very large contingent of competitors yet to make any kind of impression. Of course, it is still early days in what will be an arduous championship campaign, so it is not hard to imagine we will see the likes of Allan Woods, Adam Butler, Kevin Titman, Darren Jensen, Randy Morgan and Tim Farrell make their mark in the weeks ahead and, who knows, it might just be this Saturday night that somebody new stands tall to disrupt the status quo and bask in the spotlight of a visit to victory lane.

It is very difficult to believe that there is anybody who witnessed the opening round of the TFH Midget Series and didn’t thrill in the epic duel the feature race delivered between Charlie Brown and Michael Kendall. With Kendall cuddling the kerb on the bottom of the track, Brown ran the ragged edge up high and survived a few close calls on his way to a memorable win. Both men are back on track this weekend to continue their stoush and will be joined in battle by the likes Scott Farmer, Brock Dean, Brad Dawson, Darren Vine and Rusty Whittaker, all of whom are feature race winners at Archerfield. In the weeks following the opening round, Kendall has been victorious in Toowoomba, while Farmer and Dawson are fresh from a 1-2 finish in Maryborough last weekend. There is certainly a significant incentive to ensure that everybody gets through the heats unscathed because there will be $1000 on offer in the Bob Baker Encouragement Lucky Midget Draw if 20 cars take the green flag in the feature race.

Presented by Midas Tingalpa, the Wingless Sprint action will again see more the 20 cars in action, with Liam Atkinson heading the entry list in his pursuit of consecutive feature race wins. Having filled out the top five spots in the season opener, Ben Manson, Jayden O’Toole, Dan Moes and Ian Milnes are in the field again, while the likes of Lachlan Robertson and Tim Harris will certainly be looking to improve upon their opening round results. However, with Brody Thomsen and Robert Mazzer joining the field this weekend, the fight for a place on the podium becomes a much tougher proposition.

If either Queensland champ James Kennedy or former titleholder Kaydon Iverson are serious about winning round two of the Mainstreme Automotive Formula 500 Series this weekend, their first priority must be to go the distance without running into each other. At their previous Archerfield outing, Iverson and Kennedy were chasing down Liam Williams when contact between the pair along the back straight put both of them on the infield and handed Williams an easy win. However, it may actually be another Williams who will be setting the pace on Saturday night. In Toowoomba recently, Kristin Williams (nee Brown) blitzed the field to win the opening round of the Mainstreme Series. In a fairytale return to competition in her first outing since becoming a mother in the off-season, Williams currently sits atop the series standings.

In a small field that includes feature race winners such as Tyler Stralow, Jason Rae, Darren Baldwin and Scott Genrich, it is Andy Kimm who comes into the weekend as the form driver within the Lightning Sprint ranks. Having finished second in the opening round of the Club Championship in Toowoomba, Kimm subsequently went on to win round two in Kingaroy and is chasing a third consecutive podium result this weekend to expand his championship lead.

Gates open at 3.00pm for online ticketholders, with early racing from 4.30pm and the main program, which will also feature Formula 500 Juniors, getting underway at 6.00pm. For those unable to purchase tickets online, the ticket box will open from 4.00pm