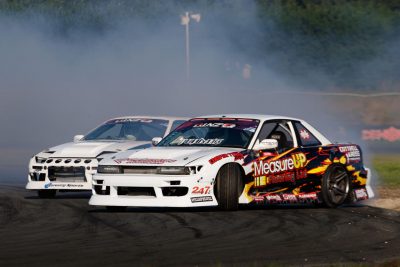 After finishing runner-up in the opening two round of the 2018 season, Northland’s Liam Burke has finally got his first win in the D1NZ Pro-Sport Series.

Burke defeated round two winner Jordy Cole in a rematch of their final Baypark battle. This time in Timaru, however, Burke took the top spot.

Burke said he was stoked to finally get a win under his belt following the two second place finishes in Wellington and Tauranga.

“I’ve been waiting for this moment, we’ve been trying so hard to get there,” Burke said.

“There’s still a few threats out there so I’m definitely not relaxed heading into the final two rounds. But having the points lead now is huge for us, its massive.”

It was an impressive comeback for the Team 13 drifter who by his own admission struggled in qualifying to lay down a high scoring run.

It was an uncharacteristically low scoring run that put him 10th in the order on Friday and meant he had to face some strong opposition to get through to the final.

“I was having really good runs in practice, but when I got to qualifying I cooked it. I don’t know what happened. I just went out and it felt like crap.

“I ended up qualifying 10th so I really had to step my game up for the battles. But we managed to pull through and everything went my way.”

Burke got the best of David Hunter in their top-16 battles, but the top-eight battle against Kyle Jackways was especially tough. Fortunately, Burke got the win and proceeded through to the top-four against Kurt Blackie.

Burke managed to stretch his legs in a battle that took place on a readjusted circuit following a track breakup during the other top-four battle.

He was especially stoked too given his finals rival Jordy Cole took pole position by 14 points over the nearest opponents a day earlier in qualifying.

It’s been an impressively quick climb to the top for Burke who debuted his Nissan Silvia S13 in the Pro-Sport Series last year at the second round in Feilding.

However, with two rounds remaining and a title on the line, Burke said he’s not afraid to step up to the Pro Series if he takes out this year’s championship.

“I’ve got heaps more to work on. You look at the Pro drivers versus the Pro-Sport drivers and it’s another level above. I’d definitely make the move up to Pro, but it would be a tough transition.”

Burke leads the title standings by 51 points over round two winner Jordy Cole heading into the fourth round of the series.