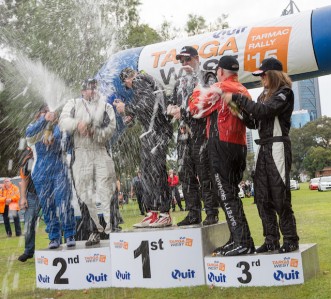 MEDIA RELEASE: After four days of tarmac rallying, Quit Targa West competitors lined-up in Malaga and then in the Perth CBD, for the last stages of this year’s event.

The frontrunners took the conservative approach to the tight, technical last stages, not wanting to relinquish the positions they spent the past three days fighting hard for.

At the end of the event there were many weary, but happy faces. Among them was Bathurst legend Jim Richards who is already looking forward to next year.

“We’ve been over quite a few times obviously, and we love the event – the roads are fantastic and everything has been good. We enjoy it, and hope to be back next year!” said Richards.

Thousands of motorsport fans turned out to see competitors complete their last laps and see the winners take to the podium in Supreme Court Gardens. 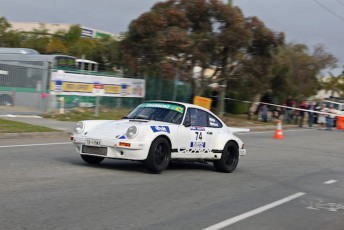 Paul Moltoni and Lisa White completing the last stages in Malaga to bring the 911 Porsche to victory. pic: Travis Barnes

“It’s been a fantastic reward for a great weekend,” said Moltoni.

“Yesterday was a long day. It takes its toll on your mind and mentally you can get exhausted. The car also starts complaining, the brakes start to fade and the gearbox starts to get hot which makes it hard to change gears – so nothing is working with you anymore and it gets a bit tough.”

“We thought we could get back to second, unless Paul had problems but he’s driven a great race so we couldn’t catch him. It is what it is at the end,” said Gunson.

In what is to be his last Targa West event, third place was claimed by David Moir (Floreat) in the Datsun 240z who was 4:43 minutes behind the leader. David’s wife has been the co-driver in previous years, so the pressure was on this year’s co-driver Evan Cockram (Morley) to get the job right.

“The Kalamunda stages are the ones we found the trickiest with the restricted speed zones making it hard work for the navigator. So in terms of book work, paper work, watching the clock and watching the Rallysafe, we found them far more demanding. The country stages are nice long and flowing – but Evan still had to get the calls out at the right time, and he’s done a great job,” said Moir. 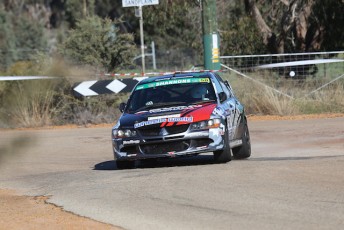 “It was a shame for Wilkinson and Rullo that have a lot of mechanical trouble over the rally, but it’s made the job easier for us. Our strategy was just to manage the lead, and make sure we got to the end,” said Major.

O’Neill had a similar strategy to Major, which also paid off for him and co-driver Lister, with a second place. This is the best Quit Targa West result so far for O’Neill who has competed two previous times.

“We have mainly just looked after the tyres and tried to manage our position on the rest of the field. We’ve pushed where we needed to push, and when we’ve needed to just consolidate and conserve, that’s what we’ve done. I haven’t driven the event with no disregard to the big picture – I’ve kept an eye on what’s going on and driven smart,” said O’Neill.

Third place was clinched by father-daughter team Stewart (Wanneroo) and Carly Liddle (Wanneroo) in the Mitsubishi Evo 10, 3.16 minutes behind the leader.

“We’ve had a fantastic weekend. Cars run well and everything has gone smoothly,” said Stewart Liddle.
“This is Carly’s first time in the co-driver’s seat and she’s done a great job. She’s even started to give me driving tips – telling me to get closer to the chicanes before I start braking!” 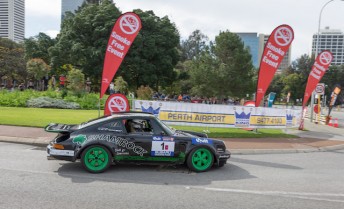 There were leadership swaps between Paul Thompson (Burns Beach) in the Porsche 911 and Martin Eyer (Gwelup) in the Triumph TR8 throughout the event, but in the end it was Thompson and co-driver Vanessa Saunderson (Burns Beach) that claimed victory by 1.46 minutes.

“The event has been excellent, we’ve had no problems. The 911 has been a great car for this sort of motorsport. My new co-pilot, and fiancée Vanessa has also been keeping me right throughout the weekend,” said Thompson. 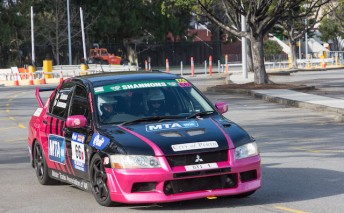 “Our strategy for the last stages was to be a bit ‘Driving Miss Daisy’ to keep our lead.”

Gunson / Lunsmann had just completed the last stage when their rear differential blew on their Evo 7.

George and Kerry Watts (Ocean Reef) in the Mitsubishi Evo 10 were 1.46 minutes behind the GTi Girls, with the Mercedes A45 AMG of Michael Broughton (Swanbourne) and David Watkin (Fremantle) in third place.