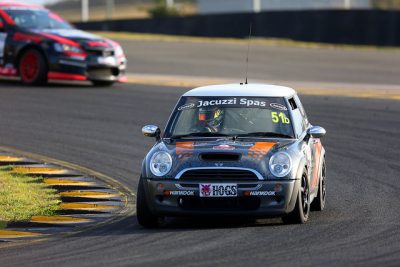 As part of the two-car MWM Racing team (which also fields the Class B1 #50 MWM Racing Volkswagen Golf), Thewlis has driven the #51 MWM Racing Mini Cooper to the top of the Class D points standings with the help of co-drivers Richard Luff and Ellexandra Best.

Luff will once again join Thewlis at the wheel as the pair look to bring home a championship title for Thewlis and second on the standings for Luff as the APC season comes to a close with the all-new APC-run Phillip Island Six Hour event.

“We are lucky enough to be currently leading the Class D championship and a lot of that has come off the back of simply committing to all of the rounds,” Thewlis said.

“We have also shown great consistency with two class round wins and two second place finishes, which helps build up a solid bank of points.

“All of that coupled with a great crew from MWM Racing who have worked tirelessly to kept our little Mini going at each round has certainly played a big part in us currently leading the championship.

“It would be fantastic to take it out! It would be a real honour if we can get the job done at Phillip Island and become Class D champions for the Australian Production Cars – it would be something nice to have on the resume for a ‘hack driver’ like myself!” laughed Thewlis.

While he leads the championship, Thewlis doesn’t expect that fact to play into his team’s race-day strategy.

“We are in a strong position and it will be up to our opposition to try something different to take away our championship,” Thewlis said.

“For us we just need to play the smart game like we have all year and finish the race. If we do that I believe we can take out the championship and the rest will be history!

“However, it’s a long race and with the race being six hours, anything can and probably will happen so we need to make sure we can adapt and make the right calls when and if that happens.

“Our team will be all over the strategy and we have full faith in what they are doing and the calls they make.

“I have to admit, I am as nervous as a duck in a doona factory coming into the last round, but once we get into it I’m sure my emotions will settle down a little bit!

“I can’t wait to get stuck into and hopefully bring home the Class D Championship! Good luck to everyone racing – race hard, have fun and most importantly, stay safe!”

Luff has joined Thewlis in driving the Mini at three of the four events held already this year. Thewlis expects the pair will have plenty of fun in the Mini on the picturesque Victorian circuit.

“I will have the ever-reliable Richard Luff co-driving with me at Phillip Island – Richard has driven with me all year except for the Winton round and he has done an exceptional job. We get along well, have a lot of fun and seem to work well together which is great,” Thewlis said.

“Throughout the year we have had some stiff competition with the Kia Proceed when it has been running and in particular when the Toyota 86s come to play!

“Considering our Mini is getting on now at 11 years old and in theory is not probably up to the standard of the new cars, we feel we have done a great job to be competitive against the newer cars with reliability and strategy being our strong point.

“At times they have certainly shown us up and we have had to lift the ante to compete against our other class D competitors, but it’s been a lot of fun doing it!

“In all honesty Phillip Island probably doesn’t suit the Mini all that well due to the fact it’s such a fast flowing type of circuit. The Mini is more at home on nimble tracks like Winton and Wakefield Park for example. But, if the heavens open and we get a wet race then the little Mini might surprise a few come the end of the race!”

Like most of his counterparts, Thewlis is quick to point out that there are a lot of people who play a part in any successful racing season.

“I have to thank our awesome crew at MWM Racing for all of the hard work and commitment they have put in this season. Without them we couldn’t do what we love and we wouldn’t have been able to achieve what we have so far,” he said.

“Running a two-car team for the first time isn’t an easy feat, but they have done a sensational job all year.

“I also have to thank Richard Luff for doing a stellar job co-driving this year, without his commitment to this season none of this would have happened.

“Last but not least I need to thank all of my awesome supporters – Car Finance 4 You, Race Driver Coach, Grimshaw Signs, Fobia Industries, Wangaratta Health and Wellbeing, Luff Property and Associates and Raceline Motorsport Racewear – as well as all of my family for their continued faith and belief in what we do.”