The night Kendrick got his groove back

The night Kendrick got his groove back 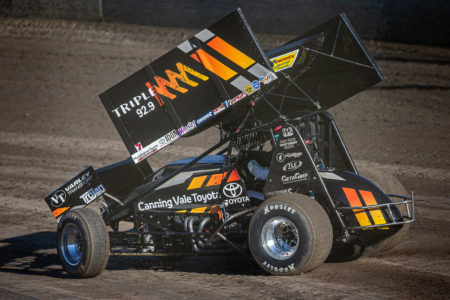 After a less-than-stellar season, Jason Kendrick might finally have some reason to be hopeful as the Perth Motorplex swings into its final events of the 2020/21 series – starting with this Saturday’s Asphalt Recycler Australia Sprintcar Gold Cup.

A second place at the Krikke Boys Shootout on March 13 gave Kendrick a solid foundation for the Maddington Toyota Sprintcar Series Triple Crown, a mini-series that takes place after the completion of the main championship.

Kendrick finished fourth in the championship points this season, a disappointing result after winning the three previous titles.

But after another 30 laps around the familiar Perth Motorplex last week, Kendrick finally had reason to smile as he gave his post-race interview.

“The middle of the season was terrible for us, so it couldn’t get any worse,” he said. “We are always out here to win. We have still got work to do and will keep working at it.”

Partly responsible for the change in pace might have been a motor change Jason father Geoff had been campaigning for.

“Dad has been whinging about the motor (I had in the car). I actually didn’t mind it, but I got sick of hearing him whinge so I said, ‘If you want to change it, change it.’ So he and the boys did.

“It was pretty quick, and the thing definitely runs better, I just have to use a different style of driving. It is a little harder to throttle but it worked for the feature, we made the car work around that. We had some really good speed towards the end.”

As Kendrick learned what the car wanted, his speed improved in the feature race of the Krikke Boys Shootout. The only thing he needed was more laps to catch the leader, Robbie Farr.

“When I was so fast at the end of the race and I see myself catching the guys at the front, and then you end up second, you think what could have been. But in the end we weren’t there and that’s all there is.

“We got the thing dialled in for the feature and it probably helped watching (Farr and Callum Williamson). I ran different lines all together. The track was great, it was probably the best track we have had all year as it slowed up a little and made for a racey surface.”