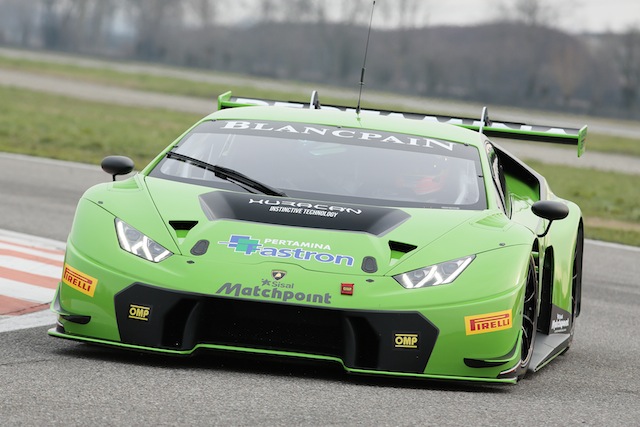 Part two of Andrew Palmer’s international sportscar racing odyssey begins in Italy this weekend (April 11/12) with the opening round of the 2015 Blancpain Endurance Series.

Indeed, it promises to be a weekend of firsts for the manufacturer’s youngest GT3 Junior Driver, who’s primary job is to ensure a successful start to the all-new Huracán GT3’s competition career during his maiden appearance at Monza.

Palmer’s last race aboard a Lamborghini in Italy ended with him winning the 2013 Super Trofeo PRO-AM World Title at Vallelunga. Monza’s high-speed layout might be very different but its one the American already feels right at home around.

“We tested there three or four weeks ago and racked up plenty of miles without any reliability issues,” he said. “It was all very positive and we feel like the Huracán GT3 stacks up pretty well in comparison to the other, more established cars. I’d be lying if I said we weren’t expecting to hit the ground running.

“I didn’t know what to expect before turning my first lap there but it’s a cool place with an incredible atmosphere. The track is super fast as well with long straights and sweeping corners, which seems to suit our car.”

Despite its storied history, this is also the first time that Lamborghini has overseen a factory motorsport project. And with its Sant’Agata Bolognese headquarters located little more than 200-kilometres southeast of the Italian Grand Prix venue, there could hardly be a more fitting place for its new chapter to begin.

“All of the Lamborghini executives will be at Monza and collectively there’s a great deal of expectation surrounding the Huracán GT3 programme,” revealed Palmer.

“They’ve been involved with various sportscar and GT projects in the past but the fact this one is being handled in-house adds greater emphasis and anticipation.

“We all really want to win so although this will be the car’s race debut we’re hoping to spring a surprise.”

That hope is borne out of months of development work and the close working relationship Lamborghini Squadra Corse enjoys with the Austrian squad running its works effort, GRT Grasser Racing Team.

“Lamborghini completely trusts Grasser with what they’re doing and listens carefully when changes are required.

“That relationship also exists between the drivers because we’ve only had one car available during development work and pre-season testing. The whole programme has very solid foundations.”

The three-hour event begins at 12:30 local time on Sunday 12 April. European viewers can catch all the action live on Motors TV while CBS Sports will air race highlights across the US. Check local listings for details.