The Honda Endurance Racing team retires from the Bol d’Or

The Honda Endurance Racing team retires from the Bol d’Or 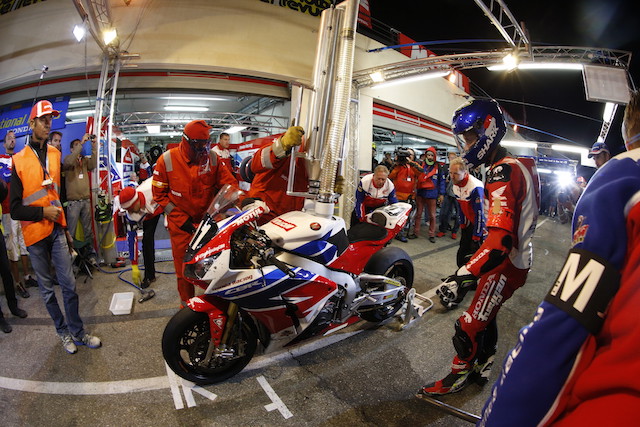 MEDIA RELEASE: After almost 20-hours racing and fighting in the top three, the Honda Endurance Racing team have retired from the Bol d’Or at the 5.8km Paul Ricard circuit in Southern France.

Honda’s Julien Da Costa, Freddy Foray and Sébastien Gimbert worked relentlessly to get the Honda CBR1000RR Fireblade SP at the front, and led for most of the race. Unfortunately, at 10:30 (local time), after completing 537-laps and almost 20-hours of racing, the Honda team announced their retirement from the Bol d’Or due to a machine failure.

The race got underway at 15:00 (GMT+1) on Saturday with Foray starting the race from fourth position. A good start saw the squad quickly move into third position and then the team battled with the top-three. At the eight and 16-hour stages the team were second and first, which allowed them to score 18 championship points.

Whilst running in second position Gimbert was forced to make an unscheduled pit stop just before 10:00 (local time) this morning. The Honda crew worked to isolate and fix the problem as quickly as possible, but at 10:30, the team was forced to retire.

The Honda team will now go back to the UK workshop and analyse the data collected to work out what forced the Honda CBR1000RR Fireblade SP out of the race.

After a year of highs and lows for the Honda Endurance Racing team, they finish the Endurance World Championship ninth with 50 points in total and determined to come back stronger for the 2016 season.

This is a very disappointing situation for the whole team, the riders, the mechanics and everyone that has made such a big effort and the fact that we were leading the race. Unfortunately we had to retire due to a failure of the machine, that’s all I can say for now.

We don’t know yet what happened, for sure we had to stop which is a shame because we were in a really good position, we were leading until after the 16-hour, then we had an engine problem that we tried to fix, but we need to do more analysis to know what it was but for sure it was not possible to continue the race.

Julien Da Costa
We are all disappointed, the endurance world is a team job, we win together, we lose together. It’s a shame that we did not finish the race because we were not the fastest team, but we were at the front for a long while which means that we had the right race strategy. I think it’s a shame for us all because there is a good atmosphere between the three riders and we’re a good team. We really hope that better luck will come for 2016.

Freddy Foray
To be honest, at the beginning of the race we didn’t think that we would be able to fight in the leading group that quickly, but then we led the race and we started to believe that this time the luck was on our side. Of course it’s disappointing because we all worked hard and we did not cross the finish line, which is hard for the whole team. We would have liked to finish the season on a positive note but that’s racing, so now we just have to keep working for next year.

Sébastien Gimbert
This race was very important to me, this season has been a bit complicated for us all because the whole team worked hard and we were unlucky most of the time. As a rider it is very frustrating, we spent the whole night fighting to stay in first position, and in the end we cannot finish the race. What I’ll keep in mind in that we made the show while we were leading, the media talked about the CBR and our team, which is great for our partners and for the people who came to support us, but I think that we deserved better luck. Now if we want to fight for victories next year we have to stay focused and get back to work as soon as possible.