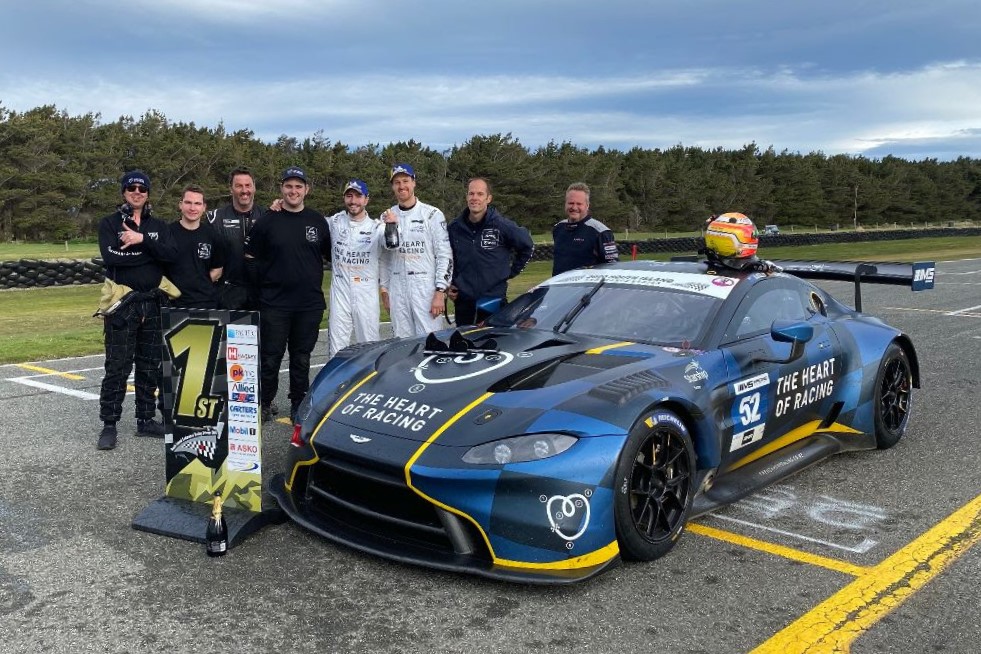 The Heart of Racing

Since finding out in July that he would suit up alongside Riberas in an Aston Martin Vantage GT3 for The Heart of Racing’s newly-established Australasian team, Kelly has been working closely to master endurance racing just as he had drift driving.

This weekend’s result proved that his hard work with the team and alongside Riberas has quickly paid off.

Kelly was first out in qualifying for the team, getting his first taste of traffic, push laps, and finding clean air while running on older tyres to feel the tyre degradation limits.

Riberas, an Aston Martin Racing factory driver, jumped into the car for the final few minutes of the session to set a time that put them near the front.

Riberas took the reins for the full stint of the second qualifying session and paid tribute to the team, knowing how hard everyone involved had worked to get such a fantastic qualifying result.

Riberas said it was a great milestone for the team after the second qualifying session, which resulted in 2nd place for the feature three-hour race.

Moments before going green, a late penalty for John McIntyre and Simon Gilbertson saw then drop from second to fifth due to causing a red flag.

That promoted Kelly and Riberas to the front row for the team’s first race on New Zealand soil.

As the race got underway, Kelly dropped to third position on Lap 3 as he struck traffic but was steady throughout the opening laps with consistent 57-second lap times.

Having dropped to fourth place briefly, Lap 10 saw Kelly latch onto the tail of the Brendon Leitch/Christina Orr-West entry. One lap later the drifting champion made a move to get back up to third place.

Lap 22 saw Kelly close the gap to the leading pair to just 0.7s, an amazing feat for the newcomer’s opening race. However, lapped traffic extended the margin back out to three seconds by Lap 25.

Kelly showed great consistency lap after lap and between Lap 44 and Lap 48, Kelly closed the gap on the seasoned International Motorsport duo of Jonny Reid and Neil Foster to 0.5s while navigating heavy traffic.

Lap 55 to Lap 65 saw the margin from first to second sit at four seconds. Riberas soon suited up and was ready for a driver swap on Lap 72.

With quick pace and a fast pit stop under the Safety Car, the Spaniard went to the lead of the race.

Come Lap 76, Reid made a pass on Riberas for the lead. The 26-year-old kept a consistent gap through Laps 76 to 96 with McIntyre joining in the fight.

Then trouble struck for Reid in the pit lane, which spelt an extra long stop. Riberas took the lead on Lap 153 with a five-second lead, he upped his pace with a new lap.

With 10 minute’s to go Reid began to close the gap, bringing down a five-second deficit to just half a second in the closing laps of the race.

In the end, Riberas and Kelly held on by a mere 0.574s over Reid and Foster to win their first race down under.

“It’s a great feeling to kick off the season with a win. As a team, we are just getting started so there is still a long way to go,” said Kelly.

“It feels unreal to be able to race again and we are so grateful for the opportunity to safely do so.

Riberas added, “International Motorsport has been showing us the world of New Zealand endurance racing and I could not be happier to represent The Heart of Racing in such a great country.”

Riberas and Kelly have had quite the journey to get to race day. Riberas began 2020 racing for The Heart of Racing in the Rolex Daytona 24 race in the IMSA SportsCar Championship in the United States.

Riberas brought Kelly on board having struck a friendship together. Kelly’s own Nissan GT-R that he campaigns in the D1NZ National Drifting Championship also carries The Heart of Racing on its doors.

“We feel so lucky to be able to raise money for The Starship Foundation. Teretonga treated us well and we are excited to kick off the North Island series next weekend.”

The team has begun preparations for the race on Saturday, September 19th at Hampton Downs Motorsport Park to start the North Island Endurance Series.

Aiming for a similar result to this weekend, The Heart of Racing has a busy week ahead including a visit to Starship with both Kelly and Riberas to give personalized gifts to the patients there.