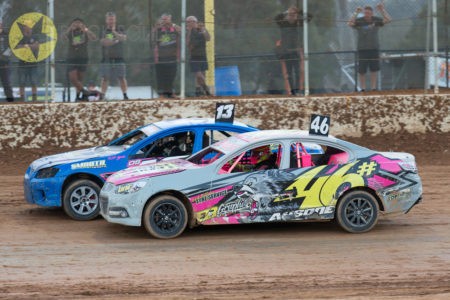 There was almost no better way to start the weekends racing than when on Friday night Alexandra Club Chief Steward Dale Morrison on a night off from official duties was a popular winner in the first heat race leading to the finish three other Alexandra member drivers to make up the first four.

Steven Watts from Warnambool, Ricky Cornwall from Kilsyth, and Beare won first round qualifiers also. Adrian Lawrence from Traralgon, Beare and Cornwall both making it two from two and Jacob Mills from Victoria’s North East were winners in round two.

Friday night closed with wins to Anthony Beare from Morris Ahearn of Bendigo and Jason Duell in one preliminary final whilst in the other Mills defeated Geelong based racer Jason Degoldi and Shane Roycroft from Kialla in the other.

A night of socialising and a morning of repairs was followed by the final nights racing with Morrison once again kicking off the action with a win. Beare making it three wins from three starts to this point, Matt Nelson from Woori Yallock and Lawrence took race wins in round three, before David Barrie, Beare making a clean sweep of four wins from four starts, Roycroft and Degoldi won in the final qualifiers.

After a last chance qualifier elevated the first four finishers the feature race with a marathon 35 lap distance on the 570-metre-long track was to be a gruelling test. Early in the feature race top qualifier Beare led, Ahearn, Cornwall, Degoldi and Roycroft. Lawrence brought himself into the battle with Roycroft then Cornwall being dislodged from the front pack a third of the race in. Watts slotted into the top five and by lap fifteen Degoldi was second behind Beare.

Watts was dislodged from the lead pack and New South Wales visitor Chris Marino slotted into the podium position. When the chequered flag unfurled to end the title race Beare had a 6 second victory margin from Degoldi, Ahearn, Marino, and Lawrence the top Alexandra member to finish.

Along the way across the weekend Beare set new one lap, ten lap and fifteen lap records for the class and continued his reign as the ‘G.O.A.T’ of Street Stock racing with a seventh Victorian title to go along with his four national titles and nine South Australian titles and multiple other titles around Australia.

Junior Sedan action seen Wandin racer and Alexandra member Dylan Barrow pick up a Top Star class feature win in an all-Alexandra member podium in front of Jayden Bryant, Breanna Simpson, Jack Randall, and Seth Sloane. Barrows was never headed in the feature race winning by just .331 of a second at the finish line as Bryant tried in vain to pinch the win.

James Oliver was too classy in the New Star class of Juniors as he won by over four seconds from Maddy Capon, the returning Rye Orme, his sister Christine Oliver, and the visiting Miller Throckmorton. James led all the way from the drop of the green flag to pick up back-to-back wins at the venue.

In Sports Sedan action the crowd-pleasing popular club class seen popular club man Josh Service winning in a class line up from Brendan Miller, Steve Kershaw, Dale Smith, and Steven Akil in another all-Alexandra podium result. Consistent laps from Service as the front of the field kept a distance between, he and who had to work his way through several positional battles before trying to catch Service.

Alexandra Speedway is back again on May the 8th with Dog Leg circuit racing including the popular Crash and Bash Class, a Ladies Open Sedan feature and club classes.