The big guns are back in town

The big guns are back in town

Having spent the last few weeks contesting interstate events with varying levels of success, several of Queensland’s standout Sprintcar competitors are returning home this weekend to contest round eleven of the East Coast Logistics Track Championship at Ausdeck Archerfield Speedway on Saturday night (February 15). The likes of Andrew Scheuerle, Lachlan McHugh, Mitchell Gee and Kevin Titman are back in action, taking on series leader Aaron Kelly, previous round winner Brent Kratzmann and another 19 drivers hell bent on breaking through for that most elusive of achievements; a Sprintcar feature race win. Also on another stacked program will be round seven of the American Tire and Racing Services Midget Series, along with Wingless Sprints, Formula 500s, Lightning Sprints and Ford vs Holden vs Sigma sedans. 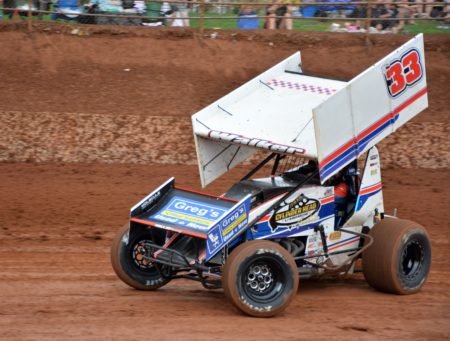 In his first outing since surrendering his Australian Championship crown in Tasmania, Scheuerle returns to the venue that has hosted so many of his career successes. Far from disgraced in his national title defence, Scheuerle qualified seventh for the championship final, only to make an early exit when he crashed out on lap three. Of course, the best way to banish any lingering disappointment will be to reacquaint himself with victory lane, so expect the former track titleholder to serve up something special this weekend. Likewise, Gold Coast gun Lachlan McHugh will be out to put a frustrating World Series experiment behind him and return to his best form. Since returning to the cockpit of his trusty Sedl Civil Contracting #23 Triple X, McHugh has shown glimpses of the form that has carried him to several feature race wins against the very best in the business and a return to home soil might prove the final ingredient in the recipe for success.

As the only driver in the field who has won multiple rounds of the series so far this season, Mitchell Gee has every reason to be oozing confidence, while opening round winner Kevin Titman is another who should fancy his chances of making another visit to victory lane. Of course, buoyed by the success that came his way in the previous round, Brent Kratzmann will relish the opportunity to do it again against an even tougher field, while Kelly will no doubt be aware that a feature race win is the best possible way to silence those who question the legitimacy of his championship lead and he certainly looked on track to do exactly that at the previous round before he was forced into a spin to avoid an errant lapped car. Meanwhile, Adam Butler, Allan Woods, Callum Walker and Ryan McNamara have all appeared on the podium this season and are again expected to feature prominently in proceedings.

Midget action will hopefully dish up a duel between Rusty Whittaker and Brock Dean, a clash that was denied at the last outing when Dean succumbed to engine gremlins early in the night. Dean and Whittaker have won five of the six rounds between them and there is no reason to think they won’t be the pacesetters once again. Opening round winner Glen Wright most certainly has other ideas, while Darren Vine will be desperate to secure his first win for the season. A prolific feature race winner in seasons past, Vine has produced plenty of pace again this season but has cruelled his chances with a series of errors that have been as costly as they been uncharacteristic. Maybe this weekend will see Vine bounce back to his best and impose himself on proceedings in a manner more in keeping with what we have come to expect from him. Having nominated but failed to front at the previous round, Callum Walker is again amongst the entries and will certainly be a threat if he can successfully navigate the logistics of running two categories on the same night.

As has been the case all season, Wingless Sprints will be out in force once again with more than 25 drivers nominated for round eight of the Ian Boettcher Race Parts/Activated Industries Super Series. Despite the strength of the fields that have contested each round, northern NSW-based racer Dave Eggins has been the dominant figure from the outset and he currently sits atop the series standings. Also from over the border, Jamie Usher is second overall at the moment and the pair will lead a six-strong contingent from NSW into battle. Paul Robinson, Lachie Robertson and Dave Ellis are the best placed of the locals and they, along with Michael Lampard, Scott Thomsen and Brody Thomsen, loom as the best chances of upstaging the interstaters.

With the absence of arch rival James Kennedy from the entry list for round five of the Touch Ups Done Right Formula 500 Series, the best likelihood of Liam Williams being beaten now rests firmly in the hands of his fiancé Kristin Brown. Make no mistake, when they hit the track, both are focussed on beating whoever stands in the way of victory, including each other. Whilst Liam has continued to dominate the results this season, Kristin has proven to be one of his biggest threats and she would love nothing better than to upstage her hubby-to-be in the feature race, while Tarhlea Apelt, Ronnie Barber and Tomas Partington will be ready to take advantage of whatever opportunity comes to spring an upset.

Dave Fanning, Keith Blatch and Tyler Stralow look the trio most likely to set the pace in round ten of the Stockman Civil Lightning Sprint Club Championship. Stralow has been the standout performer so far this season with multiple feature race victories on a variety of tracks and he leads the championship as a result. However, Fanning and Blatch possess a potent combination of speed and experience and both have recently scored feature race wins, with Blatch victorious during their last Archerfield appearance.

Gates open at 4.00pm and the on-track action gets underway with early racing from 5.00pm. The main program, which will also feature Ford vs Holden vs Sigma sedans, kicks off at 6.00pm.