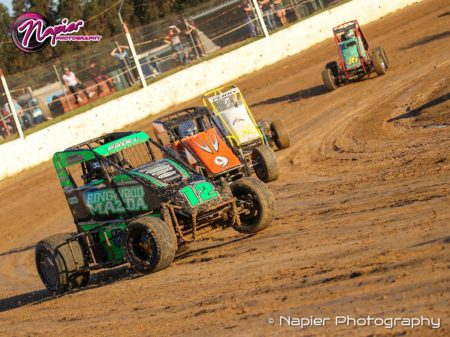 This Saturday night the Victorian Compact Speedcar Club will hold its annual Victorian title event and this time the event will be in South Gippsland at Nyora Raceway with a healthy field of Victorian’s and a handful of New South Wales challengers amongst the strong line-up that includes the current Australian champion Mark Heaton and the defending Victorian champion Justin Paull.

It is a huge season for the Victorians with the Australian title also in the state very soon, before then though it is incredibly special for anybody to win the Victorian title and attend the national title with the moniker of being ‘Victorian Champion.’

Justin Paull will be competing at a venue that has become his families home venue. The Nyora Raceway for most other classes could be considered a bullring, however for the Compact Speedcars it is a track that suits the class perfectly.

On race night our cars will zip around the track as the fastest class on the night and depending on conditions be recording laps between 14.8 to 15.8 seconds per lap for the front runners.

From New South Wales Australian champion Mark Heaton leads Kyle Sharpe and Ben Fairfax into town. Sharpe as recently as last season competed in Victoria and slotted in with the competition very well both on and off the track whilst Heaton is a regular down here in Victoria and is just one of the boys. Heaton is well and truly expected to figure in the feature event mix for victory and is one fans should keep an eye on closely.

Our Victorian contingent alongside Paull includes our Wangaratta winner Michael Conway. Conway also has a victory in another Speedway class at Nyora this season on his notch and has a little head start on the others competing Saturday night as a result. Watch for him as the race unfolds.

Mark Hutchinson owns our event sponsor business, Associated Powder coating. Mark is one of our competitors also this weekend. We thank Mark for his support of our class, a class he very much loves and gave him an opportunity to say a word. “I would like to wish all our competitors the best of luck on the weekend and hope that we all have fun and stay safe. We are very much as a club looking forward to showing Nyora Club and the fans what a great class we are. We are excited that they will see our terrific brand of racing and become fans of ours also. Thank you to Nyora for their support and to our own committee people for their dedication to getting this event off the ground.” Shared Hutchinson.

Aaron Stubbs and Duane Cordina will come to town from the Mallee region to compete, Gavin Cooper, Mark Cecil who is another very fast contender to keep your eyes on and Aaron Bacon come from the Goulburn Valley, Glenn and Andrew Wiles are very consistent with their speed, Matt Papa whose new to the class this season and shown his nose towards the front, Andrew Lardner returning to the seat of his race car, Tania Hallett another of our consistent racers from the front half of the field and Chris Curren who will also return to the seat of his race car after a little time out of the seat.