The 2015 Maserati Trofeo title to be decided at Abu Dhabi

The 2015 Maserati Trofeo title to be decided at Abu Dhabi 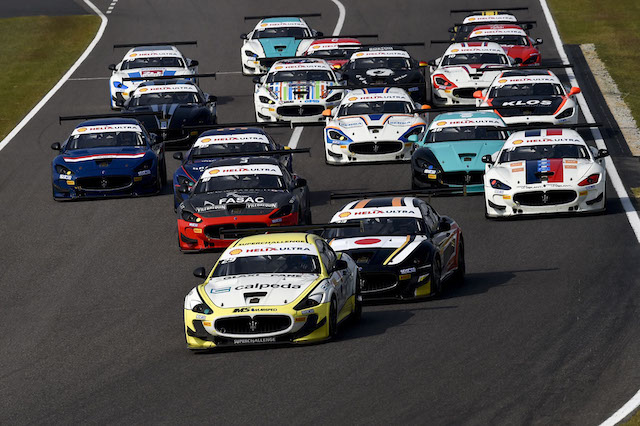 MEDIA RELEASE: For the third straight year, the Maserati Trofeo World Series will be wrapped up at Yas Marina (UAE).

Round 6 will be held on 10-11 December and will not only mark the season’s end but also the conclusion of a series inaugurated at Monza in 2010.

The past six years have seen the championship travel the globe, through Europe, North America and Asia.

After Abu Dhabi, the Maserati GranTurismo MC Trofeos will be tweaked to bring them up to the standards required for GT4 and GTS series. They will then be purchased by private squads.

However, there are still things to be sorted out before the curtain comes down on the Maserati series.

Current leader, Frenchman Romain Monti, will probably go on to take the title. He holds a 40-point lead over the driver chasing him, Italian Riccardo Ragazzi.

It has been a season to remember for Monti: he has made very few mistakes and not taken any unnecessary risks. His talent and determination have secured him four wins and untold podium finishes.

So, another runners-up spot awaits Ragazzi; he was also second in 2014 behind Mauro Calamia.

Missing the Austria round, at Spielberg, has certainly cost Ragazzi. It was there that Monti turned the screw and built up a healthy points advantage.

Even so, the Italian can console himself at having brought home two wins.

Though first spot seems a foregone conclusion, things are less clear further down the pack. Lino Curti will be defending third with a 7-point lead over Adrien De Leener and one of 14 points over Giuseppe Fascicolo.

The other titles still up for grabs – which will be awarded at a ceremony held on Friday 11 December in Abu Dhabi – are the Pirelli Single Driver Cup, contested between Monti and Ragazzi; the Pirelli Twin Drivers Cup, with Mauro Trentin and Alessandro Proh currently leading; and the Trofeo Over 50, in which Richard Denny has 127 points and Barrie Baxter 115.

The Trofeo Under 30 (won by Monti) and the Trofeo Maserati North America, claimed by Jeff Courtney, have already been decided.

Dutchman Mathjis Bakker will be making a comeback at Abu Dhabi. He won the 2014 Pirelli Twin Drivers Cup with Andrea Cecchellero. Also returning is Swiss driver Gerhard Balbi for what will be his third appearance of the season; the first two coming in Europe.

Highlights of the Abu Dhabi round of the Maserati Trofeo will later be transmitted on Motors TV in Europe.

In Italy, Odeon 24 (channel 177) and Rete Economy (Sky channel 512) will also be showing highlights of the races.

Over in North America, the www.torque.tv site will be the go-to place. These schedules will be published soon with Radio Monte Carlo providing trackside interviews with the drivers.