Thai legend to hang up helmet after Bangsaen

Thai legend to hang up helmet after Bangsaen 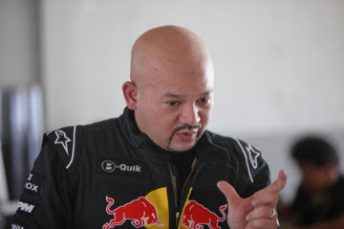 MEDIA RELEASE: We’re heading into the final countdown to the 10th Anniversary Bangsaen Grand Prix; the racecars will take to the track for the first time in just four days’ time for the opening practice sessions while this time next week the opening races will be about to get underway.

There is a huge lot of work going on as everyone prepares for the event, not least the key structural and safety changes being incorporated to prepare the circuit for FIA homologation.

This edition will wrap up the first decade of the Bangsaen Grand Prix and usher in the start of a new era – but it will also see the final racing appearance of one of the biggest names in contemporary Thai motorsport as ‘Kiki’ Sak Nana will be hanging up his helmet after performing one last display of the art of drifting. The ‘Guru of Drift’ is going to sign off in real style and the Bangsaen ‘drift show’ – always hugely popular with the fans – is going to be simply electric this week.

TA2 has arrived! That’s the big news from the last week as the first of this breed of V8 powered spaceframe racecars to arrive here – a Ford Mustang – took to Bira Circuit for its shakedown test last Tuesday morning, and it instantly impressed both the test driver, the team and onlookers as the fearsome machine gave the rafters a really good shaking. It certainly looked right at home on the historic Pattaya track, now the next stop for ‘TA2’ is Bangsaen.

And expect more new cars next week as Porsche’s Cayman sportscar becomes another ‘first’ for Thai motorsport. When it hits the streets of Bangsaen it will be the first ever representative of this popular model line to competitively take to a racetrack in Thailand. The car looks stunning so look out for it settling into Super Car GTC.

B-Quik Racing is beefing up its driver lineup for the 10th Anniversary Bangsaen Grand Prix next week, bringing in Darryl O’Young to drive the team’s venerable Porsche 997 GT3 Cup for his third shot at the prestigious street race. He has five wins out of five and five poles out of five so far – the big question is if the Hong Kong driver can make it eight out of eight? He’s certainly up for the challenge – and we are going to find out if he can keep his record run intact next weekend.

Finally, TSS was delighted to play its part in the official celebrations of the 30th anniversary of Bira International Circuit, which took place a little earlier this month. In a dedicated garage that was decked out to preview the upcoming Bangsaen Grand Prix we presented three very different racecars that each perfectly typified TSS.

Calling time on a glittering career

Thailand has produced a string of contemporary star racing drivers that have gone out into the world and demonstrated their skills, carrying the national flag high and with pride. But without any disrespect to any of our currently racing champs, one driver really stands out – his is the first name off any fan’s lips – but more than just an idol to motorsport fans such has been the winning narrative of his career that he’s long since made the less common transition to mainstream celebrity in his own right.

That driver is Sak Nana, who is known simply as ‘Kiki’ to many millions of Thais. And the news that will shock his legion of fans is that he’s hanging up his helmet and retiring.

Synonymous with the discipline of drifting, Kiki has just one final appointment on his racing calendar – the famous ‘drift show’ at the Bangsaen Grand Prix, coming up next week. It will be an emotional farewell at an event that always features a packed house, but more of that later.

So why after a stellar career that has brought such impressive rewards, particularly during the last few years and especially so in the season just gone where he’s been bang at the top of his game, has Kiki decided now is the right time to retire? “Time’s up,” he answers simply, explaining that he’s reached the peak of his career. “I’ve spent a lot of my life in racing and especially in the last three to five years in Germany I have tried to reach as high a point as I could and I reached it,” he says. “I’ve drifted all around the world and I’ve been top of the rankings in the world, three times in the top five in three of my years and I’ve gone as high as I can, especially racing in Germany.”

Many drivers prefer the comfort of being a big fish in a small pond but that route never really appealed to Kiki, even if his huge home following would have still been 100% behind him win, lose or draw. He took the challenge of mixing it with the best of the best in the world head on – in recent years he has raced in Germany, arguably the toughest domestic racing scene in the world. And Germany is where Kiki has excelled and made his mark. Further arguably, the Nürburgring 24 Hours is regarded by many as the toughest race in the world. Held on the Nordschleife and known simply as the ‘24’ to those who participate in this manic race, it was dubbed the ‘Green Hell’ by Jackie Stewart and the nickname stuck. Conditions are insane, rain, hail and snow can hit the track at any point while the other side could be dry and sunny – it’s so lethal that Formula 1 turned its back on the Nordschleife 40 years ago.

Kiki first went there in 2012 and a year later he won his class – an historic achievement and one of the greatest ever results by a Thai driver in history. When he crossed the finishline he had truly cemented his name into our record books in big block letters.

Two years later he was back on the podium while last year in the ‘VLN’ series he claimed five class wins from ten races. “No grip, can’t see, push hard” he recently captioned a post from VLN on Instagram – that sums up VLN racing, professional race driving in general and of course this man himself.

It’s pretty hard to top the achievements of the last five years and Kiki admits that helps to make it the right time to stop. “I’ve done what I set out to do, what I wanted to achieve,” he says. “I have a daughter and a lot of business commitments, I’ve given racing all my time for the last five years and there are many more things I want to do with my life.”

His journey in the cockpit actually started back in 1991 in Formula Ford at Donington Park, as far removed a setting from the warmth and comfort of Thailand that you could get. He started getting wins and the podiums under his belt in the UK and moved onto saloon cars.

It was in 1997 though that Kiki embarked on a career change that would cement his place in Thai urban folklaw as he began drifting – it was like a duck taking to water and he remembers fondly some of the biggest highlights of his racing career. “I started drifting at the big tuning events, the Birmingham Motor Show and the Max Power Show at the NEC [in the UK], at shows in Ireland and the Motorsport Show at Hockenheim,” he says. “That was between 2000 and 2005 and I drifted in almost every country in Europe, it was great to bring drifting to the shows and to the fans.”

He even represented Thailand during the ‘Race of Champions’ when it came to Bangkok’s Rajamangala Stadium in 2012. This is what redbull.com, who described him as the ‘Guru of Drift’ after seeing him in action, said at the time: “We were immediately impressed not just by his love of drifting his Toyota GT86, but also his disregard for the rules!” Never a truer statement, he defined his drifting in his own showman style.

While chasing racing glory around the world, Kiki never forgot to keep close to the Thai fans and was always a regular face in Super Car. During the TSS era he will be fondly remembered for racing a Lamborghini Gallardo GT3 and Porsche 997 GT3-R in Super Car Class 1 as well as for electrifying the crowds with the Krating Daeng Drift Team.

Now we are about to come full circle. Next weekend in Bangsaen when the sun starts to drop towards the glittering ocean and the late afternoon shadows begin to lengthen it means only one thing – the ‘drift show’ is about to begin. It’s the main attraction and the fans cling to every available vantage point to get a better view as the squealing of tyres signals that the gladiators have arrived. It ends in clouds of smoke drifting across the ocean’s waters and into the sunset. Now the greatest drifting gladiator is about to enter the ring once more and there isn’t going to be a dry eye in the house.

Kiki promises a special show on a track he loves. “Bangsaen is one of the greatest places to be,” he says “In my heart there are only two places I want to race, Bangsaen and the Nordschleife; in Bangsaen I love everything, I love the track, I love the atmosphere, I love the food, I love the fans and I love the hospitality, I really love the place. Khun Sontaya Kunplome has done so much for Thai motorsport, given so much, so it’s great to drift in Bangsaen. But now it’s time for a new generation to do my job, to show what they can do.

“The track is something special, it’s difficult and it changes, you need twenty different settings in one lap,” he says, while promising to put on a real show. “I want the spectators to enjoy it, I promise a hardcore drift show that everyone will remember and this time I will have a spare car with me; usually I don’t have a spare but I will be able to put on a hardcore show. I will also have a lucky draw for our team’s fans to sit alongside me.”

TSS is clearly as excited as everyone else to see Kiki back in action in Bangsaen but we will deeply miss him. He’s given so much to the sport and offered so much support for the series so we wish him well for the future and now look forward to the grand finale.