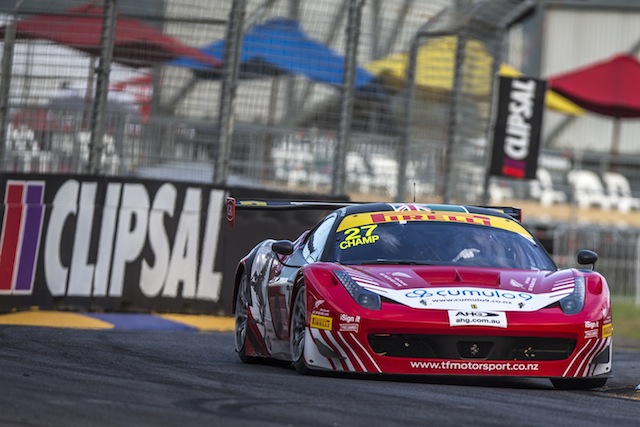 The accident was a significant blow for the Kiwi team after pacing the field all weekend and scoring pole position, and a podium finish for driver pairing Jono Lester and Paul Kelly.

The lengthy break between events has allowed TFM, in conjunction with Maranello Motorsport, to freight the damaged car to Ferrari-approved Michelotto Automobili in its native Italy for a full re-shell before returning to Australia to be shaken down ahead of the next race.

That race is the Phillip Island 101, one of two endurance rounds in the 2015 AGT Championship with the capacity field racing for 101-laps around the iconic seaside circuit.

With TFM sitting third on the points ladder behind Nathan Antunes (Audi) and Tony/Klark Quinn (McLaren), the rejuvenated team are seeking outright victory and another spirited battle with the talented field of GT3 contenders.

After the dust had settled from Adelaide we had some important decisions to make as a team. I’m pleased that we have enlisted the experts at Michelotto to repair the car and have it back to us stronger than ever for Phillip Island. I believe we can be even stronger at the 101 and win the race, and my favoured long-distance format will be a welcome addition to the programme.

We salvaged valuable points in Adelaide which cushioned the blow of my accident, and I know Jono and the TFM team are just as determined as I am to build on our potential at Phillip Island. We have the package to win there.

Adelaide was a great start for TFM with Jono and Paul in second place overall going into the third race. The crash that followed meant a re-shell and we’ve chosen to refresh our engine and gearbox in the process. We are renewed for Phillip Island and look forward to a strong finish.
– – – – – – – – – –
Trass Family Motorsport is supported in the 2015 Australian GT campaign by key partners including Cumulo9, Vortex Racewear, CRC, iSign It, Pixelsaurus, Broderick Print, Continental Car Services: Official Ferrari Dealer and the Ferrari Owners Club of New Zealand.