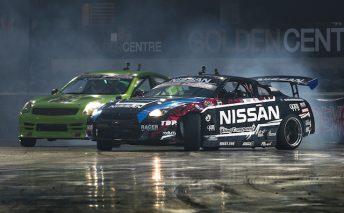 A shift into a Nissan New Zealand backed Nissan GT-R for the 2016–’17 D1NZ season saw Kelly debut the car with a podium finish at round one.

He tested the car briefly in wet conditions prior to the first round of the season. However, In a Southern Hemisphere first under the roof of Dunedin’s Forsyth Barr Stadium, Kelly had his first opportunity to compete with the car, where he finished third.

“We had no idea what to expect coming into a dry round,” said Kelly. “That’s a massive difference. The cars handle completely different in the dry, and with some speed, and all the other factors thrown in the mix.

“To come out with that sort of result just blows me away. It’s been so long in the build, and to not know what to expect and come away with a podium is amazing. It’s the best result we could’ve asked for really.”

With a positive start to the season under his belt, Kelly sits third place in the standings on 71-points behind round one winner Cole Armstrong, on 105-points, and second placed Drew Donovan, on 83-points. 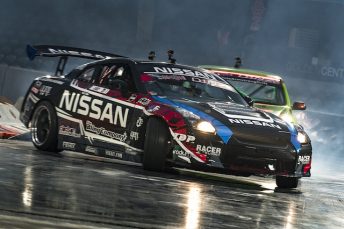 For round one, Kelly ran an unknown set-up with hopes the car would perform well. The podium result exceeded his and the team’s expectations; for a car which hadn’t had any lengthy pre-season testing.

“We haven’t even had a chance to throw a set-up at the car. That weekend we only set it up with a baseline. Basically with neutral everything, and just the wheel alignment we feel is comfortable and works in the Skyline R34.

“We just ran it and saw what happened. First thing on Thursday after doing that I just said ‘let’s leave it as it is’. It felt super good It’s been amazing, and it’s a very basic set-up.

With round two of the Demon Energy D1NZ National Drifting Championship at Manfeild Circuit Chris Amon this weekend, Kelly said a new set-up and testing will put him in good stead for the remainder of the championship.

“As soon as we can start playing with setups and dialing in some grip it’ll be sweet. We’re still running 30-pounds in the tyres, and in the R34 we were down to 18-pounds.

“It’s a massive difference in set-up. We weren’t hunting for grip in it at round one, so it just shows there’s so much more in it and we’re just going to have to see what we can make of it in and come back strong for round two.”

The second round of the 2016–’17 Demon Energy D1NZ National Drifting Championship takes place over January 6-7, at Manfeild Circuit Chris Amon. For more information about round two of the series visit www.D1NZ.com.