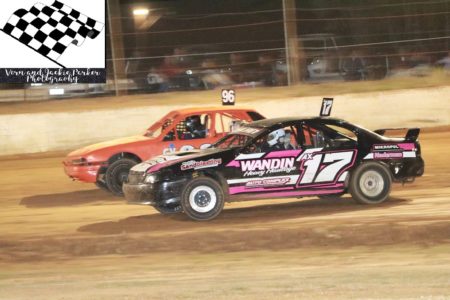 Another fantastic night of entertainment has been provided by Goulburn Valley Auto Club at its Rushworth Speedway venue with all the member local heroes and the visiting class feature events providing entertainment for the Goulburn Valley and surrounding community. The Sports Sedans final was won by Healesville man Steve Kershaw, the Grand Prix Midgets by Chris Fowler form Geelong, and the two visiting Junior Sedan finals won by Dylan Barrow from Wandin and Bryce Leek from Wangaratta.

A class field of Sports Sedans competing in the ‘Claridge Property Investments’ Sports Sedan 1000 finished with a top five result made of up drivers more than capable of such results in any Sports Sedan race around the state. $1000 was the first placed prized up for grabs and Kershaw was declared the winner of the feature a after Steward’s decision confirmed results with contact between some lead cars on the last lap. Nathan Shortis from Numurkah was determined to be second spot finisher, Luke Fallon next and then Anthony Knight and Steven Akil rounded out the top five.

In the first of two Junior Sedan features supported by ‘Total Tools Bendigo’ Dylan Barrow and Bendigo racer Bradin Claridge have been having tremendous battles around the state in the VSC Junior Sedans class and race night at Rushworth was no different as they went at it again. This time Barrow got the best of the result with Claridge in second place then Marty Bassett from Corowa finished in third with Jack Houlahan and Connor Claridge completing the podium.

Making it two wins in two weekends in the Junior 1200cc Sedans, Bryce Leek finished with victory at Rushworth. Last weekend he won at Wangaratta and this weekend the Wangaratta based race driver picked up victory in front of Riley Taylor, Sam Cherry, Connor Claridge and Libby Ahearn, both Houlahan and Ahearn representing the home club Goulburn Valley.

The annual Ironbark Classic event for the Grand Prix Midgets pitted recent winner at Wahgunyah Ash Booker and Chris Fowler against each other again. This time Alex Myers from Shepparton was in the line-up and Benalla racer Shawn Ward was keen to have a great showing with plenty of family support on hand for him and his son Jack. Fowler picked up the win, his first feature win of the season having been close at Wahgunyah and after mechanical issues most of the season. Booker followed Fowler to the finish line in second then Shawn Ward, Myers and Mark Blackeby securing the top five spots.

Kye Walters a new member of Goulburn Valley Auto Club had a win in his first drive In the Goulburn Valley Open Saloons. Walters was too good for Keith Simmonds, Wayne Gilsenan, Daniel Smith, and Matt Smith. In the GV Production Sedans Andrew Ahearn outran Shane Hutchins and Jye Sanders.

Debbie Pratt returned to racing in the GV Ladies Sedans class, and she took the feature race victory in front of Belinda Chalcraft, Chelsea Hodge, Nicole Gapes and Larissa Ahearn.