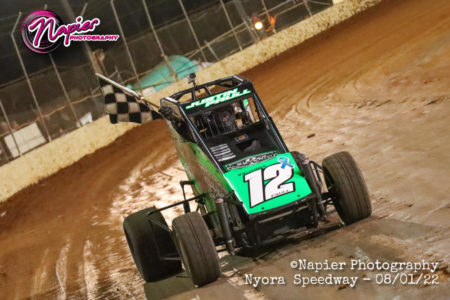 Dirt track fans were treated to a wonderful night’s action at Nyora Raceway on Saturday night when a repeat Victorian champion was crowned in Compact Speedcars, and a number of other classes entertained with terrific racing. Justin Paull from Melbourne’s Eastern suburbs retained his Compact Speedcar number one driver status, his brother Jamie Paull won $1000 in Sports Sedans, Brett Clarke from South Gippsland won a terrific Dirt Modified showdown and Mitch Foster and Wayne Sheerman shared the spoils in a terrific Standard Saloon feature event.

Drivers in the Compact Speedcar Victorian title had travelled from the Mallee, Goulburn Valley, Bendigo, New South Wales and around Melbourne’s eastern and south-eastern suburbs to compete with Australian champion Mark Heaton amongst the field. Heaton a previous Victorian champion wanted to try to add that title to his Australian, New South Wales and Australian Capital Territory title list however come up against Paull at his home club track determined to make sure he held onto the title he won a season ago.

Paull won all three of his qualifying heat races whilst Heaton won two of his three with Paull’s sister Tania Hallett, winning the other heat race. Lining up for the title race Paull, Heaton, Andrew Wiles, Matt Papa, Glen Wiles and Hallett held the top six starting positions. Paull took off quick at the start of the race leaving the field chasing whilst Hallett was the first driver to have a race incident spinning and sending her to the rear of the field for a restart.

Andrew Wiles had a terrific night in heat racing and was sitting in third looking calm and comfortable when mechanical issues forced him to park his race car in the infield. Drivers started to drop out of the race the longer it went for several reasons with Duane Cordina and Papa amongst those racers to exit the race. When the chequered flag was unfurled, Paull sped to the finish line ahead of Heaton, Kyle Sharpe, Hallett who had recovered tremendously and Glen Wiles rounding out the top five.

Justin Paull was delighted with his victory. “I want to thank all my family for their support always and my sponsors who back me so well. Thanks to the Nyora Raceway volunteers and officials for hosting our event and giving us priority and a racy track. Well done to the other competitors for their results and thank you to our own club committee and supporters for their efforts with running our title event.”

Dirt Modifieds were originally slated to compete at Bairnsdale. However, rain in East Gippsland cancelled that event by Thursday and Nyora snapped up the class for their own show. Todd Hobson from Clyde and Daryl Hickson from the Mornington Peninsula won the three heats with Hickson winning two of them and starting from pole position in the final. Brett Clarke from row two had a sensational start to the final and as Hickson and Hobson jockeyed for position at the front, the door opened down low, and Clarke accepted the invitation and shot through along the pole line and into the lead at turn two. Clarke went on to win from Hobson, Hickson and Micheal Ardley.

Jamie Paull added to a great night for his family following his little brothers Compact Speedcar win with victory in the Sports Sedan ‘Grand in the Hand’ feature. With the $1000 incentive, Paull held off Jayde Aarts who finished in second and Caleb Lincoln, Anthony Knight, and Daniel Knight.

Junior Sedan racing in the 1200cc Datsun’s and Corolla’s featured a great tussle earlier in the heats between Riley Taylor and Arthur Hutchinson with Taylor winning a heat and Hutchinson the other two. In the final, Hutchinson went on to lead all the way to win from Riley Taylor, Bryce Leek, Xander Baxter and Ella Sheedy.

Ladies Standard Saloon racing included Jaimi Barber from Wangaratta club and she proved to be too strong for the competition with victory ahead of Maddison Miles from Catani, Danielle Solly, Kate Otimi and Cece Burgess, the latter two racers being rookie drivers.

Standard Saloon drivers competed in a unique race format where there was a race in one direction with official placings up for grabs before turning the other direction, inverting the field, and racing again with placings again up for grabs. In the first fifteen-lap segment, Mitch Foster came up trumps ahead of Rhys Lansdown, Daniel Stewart, Brad Hill, and Shane Stewart. Foster was then shuffled back to start in tenth spot in the second segment with Lansdown in ninth and so on. Wayne Sheerman then won the second segment of the race from Hill, Matt Leek, Foster, and Warrick Howie.