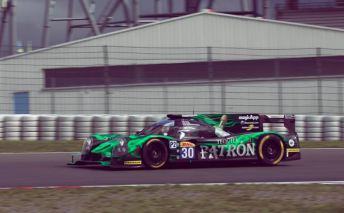 MEDIA RELEASE: It was a weekend of high hopes and dashed dreams for Tequila Patrón ESM at the FIA World Endurance Championship’s (FIA WEC) 6 Hours of Nürburgring.

At the end of the six-hour race, the team finished sixth and eighth in the LMP2 class.

After successful testing at Nürburgring back in July, Tequila Patrón ESM entered this week’s event with confidence its Ligier JS P2 Hondas were ready to take on the field and give the team a pair of podium finishes.

But for most of the race the fast setup eluded both cars, until late in the race when the team found a competitive pace but with too few laps left to make a podium finish.

The No. 30 team of Scott Sharp, Ryan Dalziel and David Heinemeier Hansson gambled early on a yellow-flag pit stop but timing was against the team when the race quickly went back to green.

All three drivers completed their stints and near the end of the race were able to run consistent lap times.

The team had a mostly clean race, with a brief off-track in Turn 15 by Heinemeier Hansson the only incident.

Slightly off pace from the other LMP2 competitors, the No. 31 crew made the right adjustments to get the No. 31 running consistent laps as the race progressed.

Turn 15 proved to be challenging for the No. 31 team as well, Brown went off-track in the same section as Heinemeier Hansson.

Tequila Patrón ESM now heads to familiar territory for the fifth round of the WEC.

The Florida-based team heads home to the United States and the Circuit of the Americas (COTA) in Austin, Texas. COTA marks the one year anniversary of Tequila Patrón ESM’s debut in the WEC.

The 6 Hours of COTA takes place on September 19, and is the team’s first United States-based race in the Ligier J2 P2 Honda prototypes.

The last time Tequila Patrón ESM competed in the States was during the 12 Hours of Sebring in March 2015.