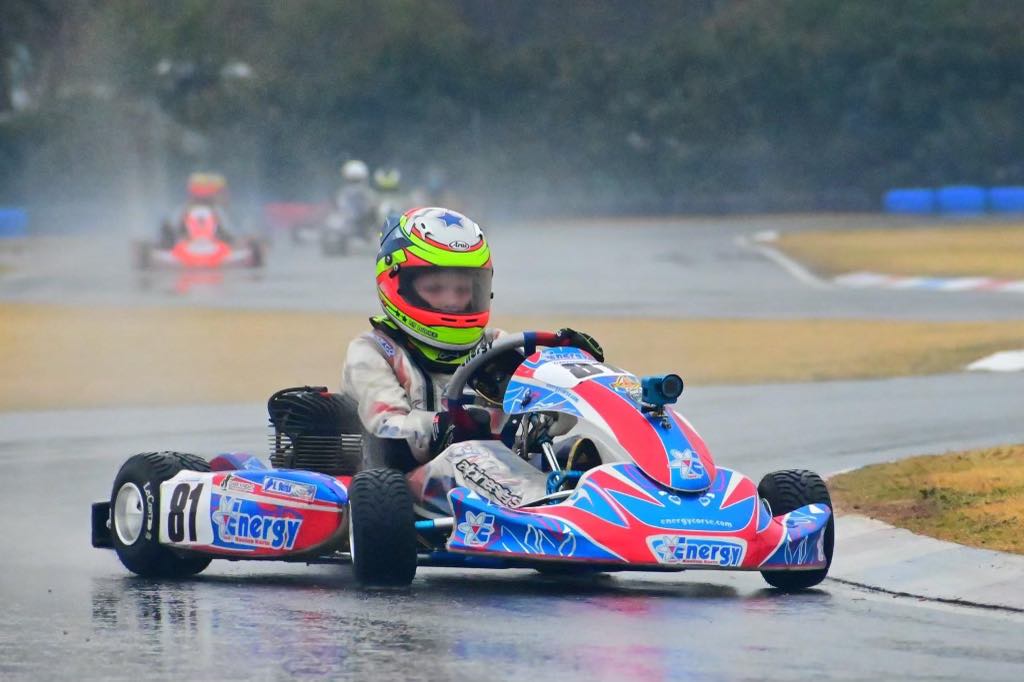 Energy Corse Australia took a large and talented team of sixteen drivers to the Warwick Kart Club to the Queensland Kart Championship. Team manager Cian Fothergill had former national champion Ky Burke and former state champion Kurtis Tennant leading the sixteen-driver team across the six classes. With the rain consistent across the weekend, the team was in for a tough and wet weekend of racing.

Kurtis Tennant and Ty O’Neill were first up for the team in the KA3 Senior category. Tennant set the tone in qualifying putting himself inside the top ten in position nine with O’Neil inside the top twenty in position nineteen. Tennant moved forward in the opening heats with a third in heat one, seventh in heat two and stormed to victory in heat three! O’Neill moved forward as high as position twelve in the second heat but a DNF in the third heat hurting his chances. Tennant was able to hit the front early in the final and never looked back taking victory and making himself the new Queensland Kart Champion! O’Neill was able to push on the edge of the top ten and came home in a respectful position twelve overall.

Tom Dare was the single driver attack in the TAG 125 Light class. Dare put himself in position twenty-nine in qualifying in the near forty kart quality field. Tom had a DNF result in heat one but bounced back to be inside the top twenty by the conclusion of the third and final heat. Dare had unfortunate incident on the opening lap of the final taking him out of contention. Tom will be back at the next meeting looking to bounce back!

KA3 Junior was the final class for the Energy Corse Australia with Ky Burke back out on circuit with Nicolas Stati and Jake Czislowski. Burke qualified just outside the top ten in position eleven with Stati inside the fifteen in fourteenv and Czislowski in position thirty-one. Burke had a brilliant three heats moving to third in heat one, fifth in heat two and a victory in heat three. Stati had a strong second place in heat one, with Czislowski moving into the top ten in the final heat. Burke put in another stellar performance, challenging for victory and coming home on the podium in second spot! Stati had a race that didn’t quite go his way, dropping down to position fifteen overall. Czislowski had an unfortunate DNF after charging forward across the heats.

Team manager Cian Fothergill spoke post weekend on the team’s results. ““It was great to have on board fellow Energy drivers from all over Australia. Tasmania, Perth and far North Queensland to name a few. It was challenging all weekend with weather conditions, however the team adapted in all conditions, wet, dirt and dry. Hitting top five finishes and wins throughout the heats and finals. The entire team are continuing to grow stronger together with each event. Energy has a great vibe and the results are starting to come consistently. Queensland Champs! Huge shout out to the entire team and also Dylan McLellan from DJM Race Engineering for supporting the team over the weekend. Time for the clean-up and we head to the Northern Territory for their state Championships this weekend”. Energy Corse Australia will be back on track this weekend at the Northern Territory State Championships!